Aftermath of Trump: The remains of dead casinos 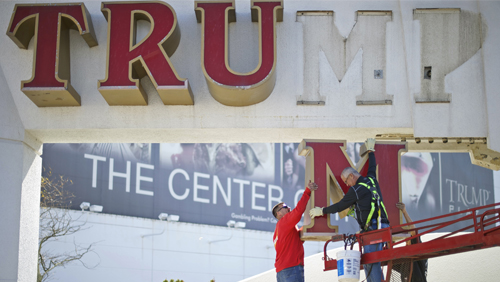 The news in Atlantic City often turns sour, with profits tumbling, casino’s looking for new buyers, and the pie not growing any bigger despite new investments. Taking a step back and looking at what has become of “the world’s playground,” The Guardian interviewed photographer Brian Rose about his new book, Atlantic City, which was inspired by the election of U.S. President Donald Trump.

Trump once owned three casinos in the New Jersey beachfront town, with 8,000 employees and a hefty chunk of the state’s gambling revenues. However, due to the casinos being built off the back of junks bonds that Trump was unable to pay off, Trump famously declared bankruptcy several times, not paying his contractors and ultimately abandoning the ventures.

The result on the town has been a higher level of unemployment, and a ghostly looking beach front. Rose said, “When Trump failed with his casinos, he turned Atlantic City into a ghost town. His legacy still haunts the boardwalk.”

Trump didn’t come out too bad in the end, borrowing more from third parties so his own wealth would go untouched. Re-investment didn’t appear to be in his vocabulary though, as he bragged about pulling wealth out of the city.

As a result, the city is a shell of its former glory. Rose describes the city as “isolated and dangerous,” with rampant drug use and crime. But the president isn’t solely to blame.

Despite new casinos going up, the competition from nearby Pennsylvania and Connecticut casinos have taken away a big part of the customer base, giving New York City and Philadelphia residents options that are much closer to home.

The lessons of Atlantic City are many, but a key takeaway, that areas like Macau seem to have learned from, is that a city can’t just expect its operators to be socially responsible and deliver prosperity to the city alone. They need to be compelled into it, or the local government needs to take their own steps towards sustainability.

Rose thinks it might be too late for Atlantic City, concluding that it will forever be looking back at its glory days.