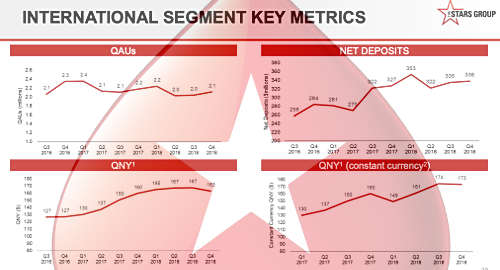 On Wednesday, TSG revealed that its Q418 revenue jumped 81.2% to US$652.8m, adjusted earnings gained nearly 63% to $239.4m while posting a net loss of $38.2m, thanks to ongoing costs related to its SBG acquisition, TSG’s various Australian add-ons (now grouped under the BetEasy banner) and US market expansion costs.

The company’s ongoing transformation is most evident in its product mix. Poker accounted for 35% of TSG’s overall revenue last year, down significantly from the dominant 65% share in 2017. Betting claimed a 32% share, while casino wasn’t far back with 30%.

TSG’s formerly dominant online poker vertical reported international (excluding UK and Australia) market revenue up a mere 1.1% to $886.6m in FY18, and the rise was even smaller (0.4%) on a constant currency basis.

The Q4 poker numbers showed a 10% revenue decline (4.4% in constant currency) due to a variety of factors, including TSG’s PokerStars brand exiting the Australian market and increased cross-sell to casino products depleting players’ poker bankrolls.

TSG reported reduced deposits by customers in certain markets following “local restrictions on some methods of payment processing,” including but not limited to Russia. TSG claimed the company was “finding alternative ways for players to deposit” in these markets.

TSG also suffered from restrictions on “certain methods of downloading” TSG’s apps, including Norway and Brazil, although the latter market apparently restored TSG’s local app store access in Q4 after only a few days’ absence.

TSG’s online casino vertical reported international revenue up 28% to $428.3m last year, thanks to launches in new markets and an ever-widening product selection. International sports betting revenue was up three-fifths to $79.1m.

As for TSG’s US market operations (the company launched its BetStars betting brand in New Jersey last September), TSG CEO Rafi Ashkenazi said the company continues to pursue its preferred strategy of a possible tie-up with unidentified media partners.

TSG expects locally regulated and taxed operations to represent roughly 80% of its 2019 revenue. The company maintains that scale matters more than ever before in locally regulated markets and thus believes it’s well positioned to continue taking market share from smaller rivals.

Despite the Russian government’s ongoing refusal to budge on regulating online poker, TSG believes it’s on “very solid footing” following its new strategy of marketing to Russian players via PokerStars’ live events in Sochi. TSG boldly predicted that its Russian operations would “gradually overcome the shortcomings in Q4” and would be “back on track” in the second half of 2019.

Notwithstanding TSG’s reduced reliance on its poker operations, the company expects the poker vertical will continue to display “low single-digit” growth each year, as well as continuing to serve as TSG’s main customer acquisition channel and a way to cross-sell customers into TSG’s other verticals.