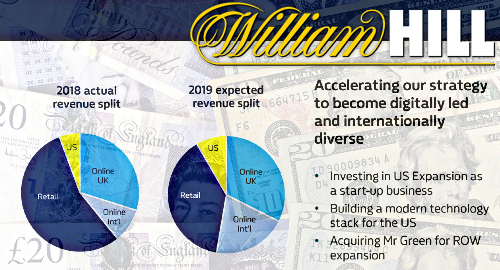 On Friday, Hills released its 2018 financial report card, which showed revenue rising 2% to £1.62b but the company booked a pre-tax net loss of £721.9m versus a £146.5m profit in 2017. The company blamed the shortfall on an £882.2m non-cash writedown following the UK government’s decision to slash the maximum stakes on fixed-odds betting terminals (FOBT) from £100 to just £2.

Absent that writedown, plus £31.2m in additional one-off charges, Hills said its 2018 adjusted operating profit would have fallen 15% year-on-year to £233.6m, resulting in a pre-tax profit of £200.2m (-16%). Investors largely shrugged at Friday’s red ink, as Hills’ shares slipped a mere 1.3% at the close of the day’s trading.

Retail revenue was down 2% year-on-year to £895.2m, as sportsbook handle fell 5%, which pushed retail betting revenue down 4% to just under £399m. In-store machine gaming revenue was essentially flat at £496.3m.

Digital revenue was up 3% to £634.4m, with sports up 3% to £318.7m and gaming up 2% to £315.7m. International operations improved 6% to £150.4m while UK digital revenue rose 2% to £484m. Online sportsbook handle was down 1% last year due to increased customer due diligence checks following the £6.2m spanking doled out last February by the UK Gambling Commission.

Hills reported a 25% rise in active digital accounts last year, although new accounts grew by a more modest 10%. And the company’s shift away from online VIPs with suspect financing contributed to a 17% fall in average revenue per user, negating any benefit from a reported 3% decline in average cost per acquisition. Moreover, digital’s cost of sales and operating costs were up 7% and 3%, respectively.

The William Hill US division had another strong year thanks to the rollout of new legal sports betting operations in several states. The existing operations in Nevada reported a one-fifth rise in betting handle while revenue improved by 38% and operating profit shot up 84% to £32.6m.

The US division’s 2018 expansion moves – the company finished the year with a presence in seven states – added £11.8m in additional revenue but the costs of setting up these new operations were steep, resulting in an operating loss of £33.2m. The company claims it currently boasts a 34% share of all legal US betting revenue.

Hills is also planning to launch a totally new US-facing technology platform in time for the upcoming NFL season, which we can only hope goes smoother than Hills’ UK-facing ‘Trafalgar’ platform rollout a couple years ago, which made the Gallipoli beach look like a Swiss watch factory.

Hills CEO Philip Bowcock said the “much needed clarity” following last year’s key regulatory decisions in the UK and US markets allowed the company to develop a new “five-year strategy and a goal to double profits by 2023.”