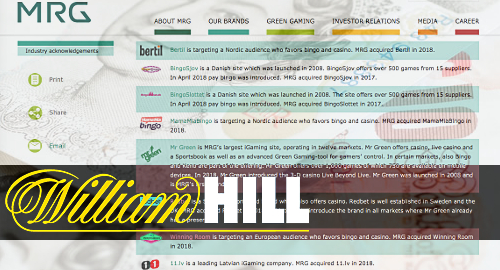 On Wednesday, Hills announced that it had submitted an offer to buy the Stockholm-listed MRG at a price of SEK69 ($7.50) per share, representing a 48.5% premium on MRG’s share price at the close of Tuesday’s trading on the Nasdaq Stockholm.

At the same time, MRG’s board of directors issued a statement saying it had unanimously recommended that its shareholders accept the deal. Seven MRG shareholders, who hold a combined 40% stake in the company, have indicated their willingness to make the deal.

An official offer document will be published at the beginning of December, with the acceptance period expected to commence on December 10 and end by January 11, 2019. The deal is subject to the usual regulatory approvals in the companies’ respective markets.

WHY ME?
Hills CEO Philip Bowcock explained his company’s interest in MRG as a means of accelerating Hills’ diversification, “immediately making us a more digital and more international business.” The move will also see Hills “move from a single brand to a suite of brands” to further bolster growth opportunities in new and existing markets.

Besides the expanded presence in MRG’s core Nordic markets, Hills will also obtain “an international hub in Malta with market entry expertise and strong growth momentum in a number of European countries.” MRG holds licenses in Denmark, Ireland, Italy, Latvia, Malta and the UK, and expects to be issued a Swedish license by year’s end.

MRG’s Q3 report card showed the benefits of the company’s recent acquisition spree, with revenue up nearly 51% to SEK445m ($48.4m), earnings up 49.4% to SEK75.5m and net income up 32% to SEK40.4m. Even stripping out the acquisitions, MRG’s organic growth in local currencies was 27.8%. MRG derives 40% of its revenue from Western Europe, 36% from the Nordics and 21% from Central, Eastern and Southern Europe.

Hills also believes that the two companies are ideologically compatible, as they share a commitment to responsible gambling initiatives via MRG’s Green Gaming predictive tool and Hill’s Nobody Harmed campaign.

It remains to be seen whether Hills will have an effect on MRG’s current stance towards the Netherlands. MRG was recently hit with a €312k penalty by the local regulator for serving Dutch punters without local permission but MRG CEO Per Norman told analysts last week that it was “business as usual in the Netherlands,” despite warnings that sanctioned operators will have to serve a ‘time out’ when the Dutch regulated market finally launches.

UK investors appeared to approve of Hills’ intentions, pushing the company’s share price up as high as 10% on the initial news, although the price has since fallen back to the +4% range.