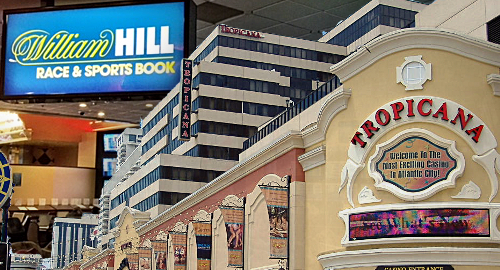 On Wednesday, both Hills and Eldorado issued statements confirming Tuesday’s media report that the two had entered into a US-facing joint venture that will see Eldorado take a 20% stake in William Hill US, along with $50m worth of shares in Hills’ UK parent company. The agreement’s initial term is for a hefty 25 years.

Hills will become Eldorado’s exclusive partner for land-based and online sports betting, as well as online gambling, in the 13 states in which Eldorado operates gaming venues, assuming those states pass the necessary legislation. Hills will retain the right to operate online casino gambling under “any second skin.”

“Within weeks,” the partners plan to launch William Hill sportsbooks at Eldorado properties in three states: the Tropicana in Atlantic City; the Mountaineer Casino Racetrack and Resort in West Virginia and three casinos in Mississippi – the Lady Luck Casino in Vicksburg, Isle of Capri in Lula and Tropicana Casino in Greenville.

The partners will invest equally in the development and construction of the in-casino sportsbooks as well as online and mobile betting. The initial focus will be on the three states mentioned above, plus Iowa, where Hills already operates a race book at Caesars Entertainment’s Horseshoe Council Bluffs, and where Eldorado operates the Isle of Capri Waterloo casino.

Hills’ statement added that the company plans to open a sportsbook in Pennsylvania “in the coming weeks,” although its land-based partner went unidentified.

UK investors welcomed the news, with Hills shares climbing over 5% on Wednesday, while Eldorado’s shares were essentially flat in the day’s early trading.

NFL”S BETTING BILLIONS
Meanwhile, the American Gaming Association has released the results of a new Nielsen survey that claims the National Football League stands to gain a $2.3b bump in its annual revenue thanks to the broad impacts of legal wagering.

The survey claims that increased fan engagement will result in $1.75b in new revenue via media rights, sponsorships, merchandise and ticket sales, while an additional $573m will come via gambling advertising, sponsorship revenue and data rights.

Much like the AGA’s oft-repeated claim that annual US sports betting turnover via unauthorized bookmakers amounts to hundreds of billions of dollars, the accuracy of this latest Nielsen survey’s figures is hard to gauge. Even Nielsen admits that its figures assume a “best case scenario” in which all prospective US bettors go all-in with their legal wagering options.

The NFL has yet to confirm it, but scuttlebutt has it that the league has decided to relax its ban on teams accepting marketing deals with casino operators. However, this relaxed policy reportedly won’t extend to casino sportsbooks.