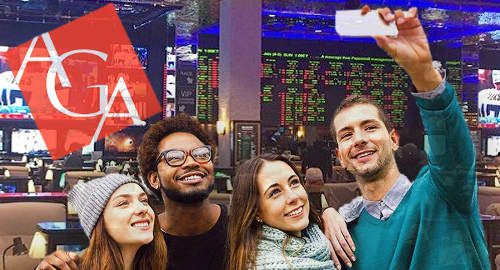 American sports bettors are younger, smarter, richer and (probably) better looking than the average Yank, according to the nation’s gaming industry trade group.

On Tuesday, the American Gaming Association (AGA) released the results of a Nielsen Sports survey aimed at identifying the demographic and behavioral characteristics of the average US sports bettor. Future surveys will provide highly debatable estimates of how much revenue can be derived from a mature US betting market.

In the meantime, Nielsen claims that 44% of sports bettors are under 35 years old, compared to 31% of the general population. Oddly enough, the sport with the highest number of avid bettors under 35 was that old stodgy standby baseball (54%), eclipsing basketball (52%), football (50%) and hockey (48%).

However, the NFL claimed the biggest slice of avid bettors of any age (9%), beating out basketball (8%), baseball (6%) and hockey (4%). Roughly similar percentages also applied to casual bettors, suggesting that America still hasn’t gotten over Fox Sports’ disastrous experiment with that stupid glowing hockey puck in the 1990s.

Avid bettors were indeed better off financially than the average American, with 29% of these bettors reporting household income over $100k per year, nearly twice the national average.

However, the sport with the highest slice of these well-heeled bettors was hockey (50%), beating out baseball (43%), basketball (38%) and football (35%), suggesting that all those rich Canadian ex-pat actors living in California are skewing the numbers with their degenerate betting activity.

With the AGA having jumped on the legal betting bandwagon a few years ago, Nielsen was also asked to determine how many current bettors would switch their allegiance to a “legal method” of wagering, aka that provided by a fully paid-up member of the AGA.

Some 38% of those who “placed a bet with a bookie” said they would “completely” switch to a legal method should the option present itself, while one-third would “use current method less and legal platform more often,” while a stubborn 29% said there would be “no change” in their behavior.

Based on these results, Nielsen concluded that there would be a 60% increase in the number of football bettors if wagering was legalized across the US, a greater surge than baseball (55%), basketball (24%) and hockey (24%).

Sara Slane, the AGA’s senior VP of public affairs, said the data indicates that legal wagering “will bring millennial audiences back to sports broadcasts and stadiums,” but only through the adoption of a consumer-friendly focus on “competitive odds, access to all bets and the ability to tap into modern platforms including mobile.”