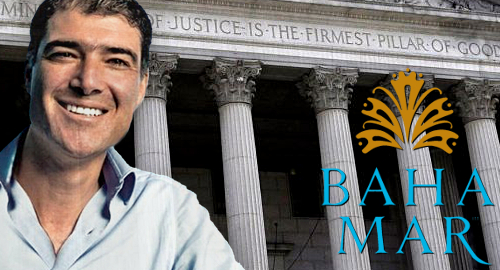 Casino developer Sarkis Izmirlian has scored a procedural victory in his $2.25b fraud lawsuit against the Chinese state-run firm that built the Baha Mar resort casino in the Bahamas.

On Friday, the Bahamas Tribune reported that the New York State Supreme Court had rejected a bid by China Construction America (CCA) to dismiss Izmirlian’s fraud suit. The publicity-averse CCA had asked the New York court to send the case to arbitration, which would have allowed CCA to keep the proceedings out of the public domain.

CCA will now have until February 13, 2019 to file a formal defense against Izmirlian’s allegations of fraud. The parties are scheduled to be back in court on February 27.

In December 2017, Izmirlian’s BML Properties filed suit against CCA, the American subsidiary of China’s state-owned China State Construction Engineering Corp. Izmirlian accused CCA of willfully misleading him regarding its inability to complete the $4.2b Baha Mar resort on schedule.

Izmirlian (pictured) received continued assurances from CCA that all was progressing according to plan, even as deadlines came and went and Izmirlian’s bills mounted. Even after CCA was found to have devoted insufficient resources to the project, it failed to allocate more resources, all the while assuring Izmirlian that all was well.

Based on these assurances, Izmirlian went deeper into debt to keep the project afloat while taking hotel reservations that would never be honored. Izmirlian’s attorneys later discovered communications between CCA and its parent company in which CCA admitted that it wasn’t capable of finishing the job on time, even as it continued to tell Izmirlian the opposite.

Izmirlian lost his total $845m investment in Baha Mar when Chinese bankers foreclosed on the unfinished property in 2015. These bankers sold control of the project to Hong Kong conglomerate Chow Tai Fook Enterprises (CTFE) in late-2016, and the property opened its doors the following April. The resort got off to a sluggish start but has since shown signs of hope that it could turn out to be the draw Izmirlian always said it would.