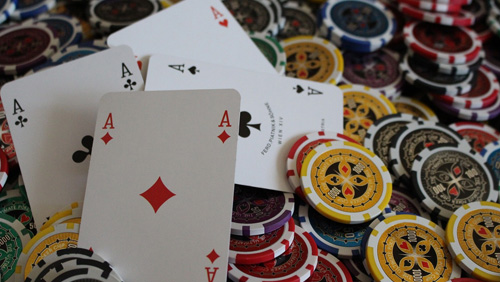 The World Series of Poker (WSOP) is not only the place where people flock to play the game relegated to the shadows in countries that fear gamblers will unite and run amok throughout the streets. It’s also a place where the giants of the poker world meet to do business—like Poker

The pieces are coming together.

partypoker recently gave a million bucks to Tom Marchese as the winner of the inaugural partypoker MILLIONS Vegas, held at the ARIA Resort and Casino, and before Marchese has a chance to don that crown, ARIA’s partner Poker Central announces a pretty big deal.

partypoker LIVE has sold exclusive rights to stream the partypoker MILLIONS tour live on PokerGO’s OTT service. The MILLIONS brand has quickly become one of the most sought after titles in poker, alongside the European Poker Tour (EPT), World Poker Tour (WPT) and WSOP, and it’s a good deal for the online subscription service.

“Expanding the PokerGO offering to include exclusive live streaming of MILLIONS tour stops is a milestone for us, and so is the inaugural Super High Roller Bowl Bahamas which furthers the global reach of our prestigious events,” said Sam Simmons, president of Poker Central. “partypoker Live organizes some of the most illustrious events in the world, making them a perfect addition to the PokerGO portfolio.”

The deal also sees the creation of the first-ever Super High Roller Bowl (SHRB) Bahamas. The $250,000 buy-in event forms part of the MILLIONS World itinerary scheduled for Nov 15-24 at the Baha Mar Resort.

The event is a direct replacement for the $250,000 No-Limit Hold’em Super High Roller Championships that went ahead during the previous MILLIONS World series in November 2018 when Steffen Sontheimer conquered a 34-entrant field to win a personal best $3,685,000.

“We’re partnering with Poker Central, a team that delivers best-in-class content and major poker event production, to elevate the partypoker event experience for our fans,” said John Duthie, president at partypoker LIVE. “This exclusive streaming deal will bring poker fans from all over the world together while expanding our brand and player experience.”

In March, the SHRB expanded its brand beyond Las Vegas for the first time when 75 entrants competed in the HKD 2,100,000 (USD 266,700) buy-in SHRB China, which Justin Bonomo won for $4.8m. Bonomo would go on to win the SHRB in Las Vegas two months later for $5m and will be one of the favourites to make it three in a row in the Bahamas.

The deal goes some way to appeasing upset PokerGO subscribers after they saw their WSOP coverage cut to the quick after Poker Central struck a similar deal with CBS that saw them hand the bulk of their WSOP coverage to the broadcast giant’s exclusive subscription service.​