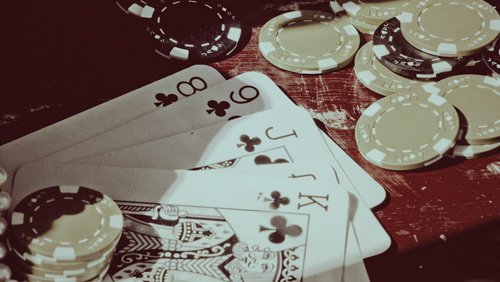 Preben Stokkan leads the final 1,286 players in the World Series of Poker Main Event, as the iconic poker tournament reaches the money on Day 3.

Walking through the gateway to the Hogwarts-like house, swallowing mayflies, I could tell that it was something worth a prod. Curled in a fossiled sphere, the anthropologist in me emerged, as I explained to the interested and excitable 3-year-old what it was.

One side was the perfect curled skeleton of a squirrel. On the post-prod side was the fur lining—death and life juxtaposed in a paleontological oddity. Died during hibernation, somehow ending up pushed out of its home by the new buyers?

“I hope it gets better soon.”

Squirrels, alive and not fossilised, are a sight to behold in the U.K. We stop our too-fast walks through the park, dropping our mobile phone gaze to watch them scurry around in delight.

In America, they catch them and kill them.

Also, in America, they have the World Series of Poker (WSOP), and as I walked through the various varieties of Japanese fauna, pondering how to explain the process of death to my daughter, I wondered which squirrel was going to end up with the most nuts during the Main Event after driving pest after pest into the cold hard rail?

Day 3 of the most iconic poker tournament in the world, the $10,000 WSOP Main Event, began with 2,880 players and ended with 1,286. It was a nice number as it represented the total number of players who would earn a minimum of $15,000 for finishing in the money—a Polaroid worthy moment if there ever was one.

The man who hit the rail in the position that must feel as warming as an arranged marriage was Ryan Pochedly, and it happened in the final hand dealt before dealers were asked to hold up for hand-for-hand play to begin.

Julian Pineda was the man to deal the final blow, a hand where he’d 3bet in position with 76ss, bet and was called on a 7h8d3s flop, checked back the king turn and then overbet jammed on the 7 river with his rivered trip 7’s. Pochedly called off his roughly 300k stack, still good for 50 bigs with AK for two pair and that’s all she wrote.

After being announced as the bubble boy, Jack Effel presented him with his entry to the 2020 Main Event, but that must feel like little consolation after torching his chances of going deeper in the one tournament in the world you want to venture deeper into.

Those that ended up like a toy soldier in the hands of a childhood serial killer to be were the defending champion, John Cynn, the veteran, TJ Cloutier, and Joe Hachem. The former WSOP Main Event winner may be out, but his son, Daniel {Hachem}, made it to Day 4 with 1,036,000 in chips meaning we might still have our first father/son World Champion double.

Notable stacks going into Day 4 include Preben Stokkan—the end of day chip leader with 2,184,000, good for 273 big blinds when play resumes. The Norwegian, was down to the proverbial ‘chip and a chair’ after a disastrous ‘bluff gone wrong’ but managed to spin it up into the biggest stack of the day. It’s only Stokkan’s sixth-ever cash in a WSOP event, preferring to take his dolls into the online playground.