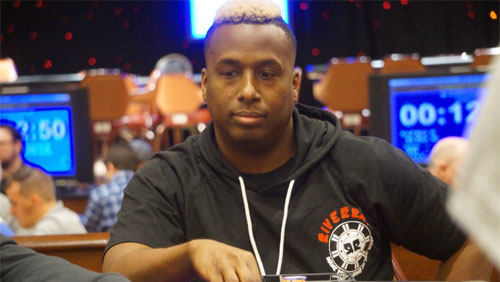 Lee Davy confronts racism in the wake of the recent attack on Maurice Hawkins by Sorin Lovin, and questions the potential for the World Series of Poker to partner with organisations that fight to stamp this behaviour out of the world.

I’m not a natural empath.

Like a T-bone steak, I have to work on it.

I’m vegan, but I couldn’t think of a non-animal product association. The closest I came to was an aubergine, or an eggplant if you live in the great US of A, a country that Maurice Hawkins was proud to call home on Friday.

There was this kid.

His name was Gareth Something.

We were in science class, sitting on these tall wooden stools, setting things alight with Bunsen Burners; things that smelled of eggy farts. Gareth Something turned the Burner towards me. I said something to him; I can’t remember what – it was over 30-years ago.

“Fuck you, Chink.” Said Gareth Something.

He fell off his stool.

I was on him with the speed of a teenager on warm, ripe flesh; pounding, wailing, spitting.

Gareth Something was sobbing his heart out when Mr Beynon pulled me off him.

“Your nickname is Ching,” she said.

“What’s the difference? You broke the lad’s arm.”

Gareth Something never called me a Chink ever again.

Back then, if anyone called me a Chink, Gook, or uttered any other racial slur, it didn’t matter how big they were, I would find a way to make it right.

Many an angry cane found its way to the palm of my hand as a result.

But what about now?

What would I do if someone walked into the coffee shop, poured my coconut latte onto the floor, and called me a Chink?

I would swallow the ego, find a way to diffuse the situation. The Chinese racist arrows never pierced by heart because they were tipped with racial poison. They found their way through tendon and bone because someone was trying to gain a superior edge on me.

It was a hierarchical thing, and I refused the offer of a position on a lower rung.

Well, put it this way. I swear a lot in my writing. I use the word fuck a lot, and cunt also makes an appearance every once and a while. And yet, I don’t feel comfortable writing the N word.

There is a compelling history behind racial slurs against African-Americans. A history that I can’t fully empathise with, as I have no experience of it. The hierarchical issues that I faced are still there. When someone calls someone else a n*****, they are asserting their dominance over them in an almost genetic way. However, the use of this word carries the atomic power of many generations of subjugation.

I never felt the need to protect my genetic roots.

I merely didn’t like someone getting into my face expressing their dislike for me.

I say all of this because during Day 2 of Event #66: $1,500 No-Limit Hold’em, a player of Russian registration, but wearing a blue ‘Team Italy’ t-shirt going by the name Sorin Lovin thought it would be a good idea to fire an N-bomb at Maurice Hawkins.

It’s been a challenging few months for Hawkins.

In poker, reputation is everything, and the Hawk’s had been hanging like used toilet paper stuck to the side of a bog, after various news sources ran with a tale that Hawkins had swindled his backer, Hal Lewis, out of the sturdy sum of $22,788.

Well, here at the World Series, you can say.
SHUT UP NIGGER. And all you do is get a penalty for the rest of the day. Basically not disqualified. So take it for what it is. I am not protected from racial slurs or anything. Had to take a L, and I didn’t like it. #HawksView

Apparently, using a racial slur is only deemed worthy of a one round penalty.

Christ, it takes that long to take a number two.

As you can see, Hawkins went to social media, and the news quickly spread, as poker players suddenly found something else to do with their fingers except throwing cards into the muck.

The WSOP’s leading man, Jack Effel, got a hold of the story, marched over to the table, told Lovin to get up, explained that his house was not a house where racism would be accepted, and walked the dude out of the building into the searing heat.

It was a move that led to a round of applause on Twitter from the victim.

Update on on the Racist guy from the WSOP.Jack Effel just showed America how to deal with Racism, and that’s Zero tolerance. I am proud to play in @Wsop and be apart of their brand. (Thankyou) He Perped walked the racist guy out of the Tournament Area and DQ”ed him.#HawksView

And it was a good job Hawkins didn’t react the way I did with Gareth Something back in the day. According to the multiple-bracelet winner, Dan Heimiller, he once saw Sayed Hussain called the N-word by a player. Sayed swung a punch, hit him on the shoulder, knocked him to the floor, and Caesars banned Hussain for life.

Now let’s turn to the difference of opinion.

The Difference of Opinion

The floorperson issues a one round penalty, and his boss overrules him. Not only does this undermine the authority of the person making the initial call, but it makes you question his ability to do his job.

Take the 2018 World Cup in Russia, for example.

McLovin isn’t the only person from Russia who likes to throw racial slurs around.

Yaya Toure experienced the same brainless behaviour when playing for Manchester City against CSKA Moscow in a 2013 Champions League match. Someone threw a banana onto the pitch in a 2016 Champions League match between FC Rostov and PSV Eindhoven, and England full-back Danny Rose told his family not to travel to the country because he feared racial abuse.

FIFA and the Russian Football Union (RFU) issued a reminder before the beginning of the tournament that the full power of rule over an incident of this nature lies with the referee.

The referee has three options:

1. Stop the match, and warn the crowd to stop.
2. Suspend the game until the idiots stop.
3. Abandon the game.

Danny Rose even went as far as to say that his England teammates and he would march off the pitch if any of them received racial abuse.

So far, all seems well in the stands.

I think this incident shows a need for the WSOP to sharpen the minds of the floorpersons and dealers pre-event, and also send a warning out to players ahead of the festival making it crystal clear the consequences for people who decide on this course of action.

And while they’re at it, why not partner with an organisation that fights against racism and gender inequality, and promote the need for racial and gender love throughout the event, because I for one, cannot think of a sport that brings so many different races and genders together on a regular basis than poker.

Hawkins and Lewis ended up in front of the beak. Lewis denied that any of the quotes and comments came from his mouth or fingertips, declared that the 11-time World Series of Poker Circuit (WSOPC) gold ring winner is an upstanding citizen, and said there was not a 1 cent axe to grind, let alone one worth twenty large.

So the last thing the Hawk needed was someone getting into his face, telling him to “Shut up, n*****,” during a WSOP event.

It happened, and initially, Hawkins wasn’t too happy with the way the floorperson dealt with it.