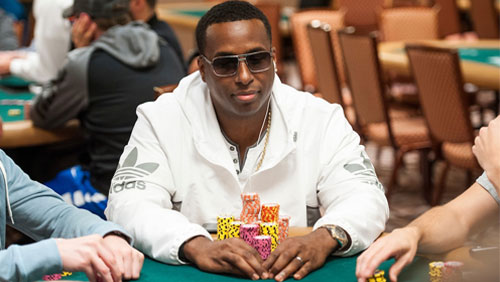 Maurice Hawkins has won his 11th World Series of Poker Circuit gold ring, pulling him one behind the leader Valentin Vornicu, as he lands an ace on the river to crack kings in his heads-up duel with Peter Vitantonio.

As the giant table umbrellas fight desperately to escape the tight blue cord that keeps them bound, and the seat covers pile high in the sky, I wave bye-bye to my last Montenegro dawn.

Somethings have to change.

While Valentin Vornicu was dealing with New Orleans poker players like those in white smocks deal with the things that hang from slaughterhouse hooks, I wondered to myself – where is Maurice Hawkins?

It turns out he was there, watching from a machine gun tower, unable to defend his accolades from being ripped from his grasp.

And then along came Vornicu.

He still has that lead.

But it’s a lot closer.

Hawkins came up against Peter Vitantonio during the heads-up action and had to overcome a 66bb v 41bb chip lead. Hawkins did overtake Vitantonio, but the  Ohio native snatched it back, and nearly won his fourth ring when he got it in with KK v AQ, only for Hawkins to do a Barry Greenstein before going on to seal the deal.

Wouldn’t it be great to see Hawkins v Vornicu, heads-up, fighting for the WSOPC Global Casino Championships for the bracelet?

And as a barrage of women emerge from the restaurant to cut the blue cord, and push the cushions underneath the bums of the wealthy, that’s my thought.

It was a big weekend for the WSOP.

The first US Tri-State online poker mega-event took place with the $500 buy-in Coast to Coast Classic Main Event promising $200,001 in guaranteed prize money on WSOP.com, making it the meatiest offering since online poker returned to the US. I don’t have a winner for you yet, but I know that they smashed the $200,001 guarantee.

And the $1,675 Main Event at that WSOPC event in New Orleans attracted 677 entrants. At the time of writing, 14 remain, and it’s that man Vitantonio at the head of the chip counts. Hawkins finished 66th and Vornicu 86th.