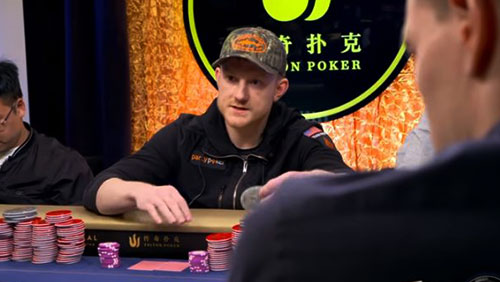 Lee Davy’s coverage of the Triton Poker Series in Montenegro comes to an end with Jason Koon defeating a field of 103 entrants to win the $3.6m first prize in the HKD 1m buy-in Short-Deck, Ante-Only tournament.

I spy with my little eye, something beginning with ‘Jason Koon‘. He’s sitting, alone, eating some chicken, and drinking a glass of water, ice cubes struggling to keep their shit together underneath the brilliant heat.

A few hours ago, Koon told Laura Cornelius that $3.6m was a ‘big’ number. It was 6 am in the morning. Laura looked good considering minutes before she was on the verge of overdosing on candy cigarettes as the final table of the HKD 1,000,000 buy-in Short-Deck, Ante-Only tournament went on as long as a rocket trip to Mars.

Koon, a good looking man himself, looked like a ghoul, desperate to remove himself from the front lines so he could walk down to the seafront and Facetime his girlfriend to give her the news.

I walk over to him, take a seat, and have a chinwag about one of the most extraordinary weeks of his life. Koon loves it, but he’s quite confident each hand is shaving time off his life.

The American finished fourth in the HKD 250,000 Short-Deck, Ante Only tournament. It was the first time he had ever played the event. To put things into perspective the German crushers and people like Steve O’Dwyer and Stephen Chidwick didn’t sit down for a game.

And now he’s won $3.6m, after beating Xuan Tuan, heads-up. And what I love about Koon as he shoves another forkful of white meat into his mouth is his humility.

During his post-match interview, of which I doubt Koon has any recollection, he spent the whole time putting Tuan on a pedestal.

“He is a superior player to me,” said Koon, talking about his inexperience at Short Deck Poker.

Sandwiched in between these two final tables was a €1m cash game where Koon appeared in the two most substantial No-Limit Hold’em pots ever witnessed on Livestream, losing a €1.8m pot to Kane Kalas, before winning the same sort of sum in a hand against Elton Tsang.

And this is how crazy this trip has been.

Only on the Triton Poker Series can a man win $3.6m, and then be afraid that he could sit down in a cash game and lose the lot if the deck decides to take the driver out of the bag and club him over the head with it.

And Then it Ended

It’s been a terrific week at the Maestral Casino & Resort in Montenegro. With the European Poker Tour (EPT) and partypoker MILLIONS brands clubbing each other over the hand with gargantuan guarantee after gargantuan guarantee, Triton had to think of something different if it was to find a home in what is a very overcrowded market.

Triton is now the home of Short-Deck Poker, and with it comes the largest group of rich non-professionals you will find anywhere in the world. The beauty of Short-Deck is it gives the recreational players a chance while allowing the pros to mop up over the long run.

And who else can attract Phil Ivey, Tom Dwan and Patrik Antonius?

The Triton Poker brand has a bright future. Montenegro is the nuts. Paul Phua has done a tremendous job transforming the Maestral from a 3-Star deadbeat joint to one of the most luxurious gaffs on the Adriatic shoreline.

Triton will face a tough time besting this event.

They will try to do that July 23-31 when the gang moves to the South Korean island of Jeju, and I have a feeling a certain Jason Koon will be there hoping to land a few more ‘big numbers’.