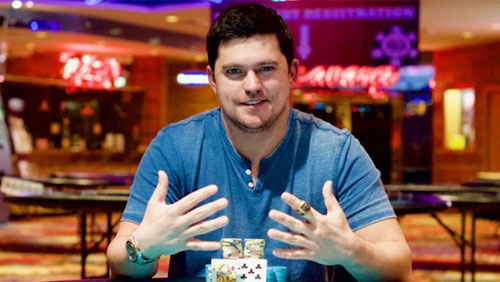 To win a live poker tournament is a beautiful thing. There is a deeply dippy dreaminess about leaving the dregs behind and competing in the end zone. To do it twice, on the bounce, one after another – now that’s something entirely different.

The Neo-like question came from the lips of Valentin Vornicu after winning back-to-back $365 buy-in World Series of Poker Circuit (WSOPC) side events at Harrah’s New Orleans.

For six months, Vornicu and Maurice Hawkins were the snow on top of WSOPC greatness with ten gold rings each – one for each finger. If you get into a fistfight with one of these two, you’re going home with at least one WSOP mark on your mush.

Yesterday, Vornicu waved goodbye to Hawkins, slipped off his left shoe and sock and slipped his 11th gold ring over his big hairy toe after beating a 1,340 entrant field in the opening $365 buy-in event, banking $64,205 in the process. Moving from medial to lateral, another toe, the longest of the ten, is now wrapped in gold.

Vornicu entered the final table as the chip leader, and that’s always bad news in these smaller buy-in events. The Romanian born star would have been like a lion in the land of lambs. After much gnashing of teeth, Vornicu had won back-to-back tournaments for the first time in his career. The event attracted 349 entrants.

Phil Ivey Will Play at the WSOP

Phil Ivey fans will be pleased to hear that he will be leaving big money Asian cash games to compete in the World Series of Poker (WSOP) this summer.

Ivey declared his intention to return to Vegas during a post-match interview with PokerNews’ Laura Cornelius in the wake of his Triton Poker HKD 250,000 buy-in Short-Deck, Ante-Only No-Limit Hold’em win in Montenegro this week.

The last time we saw Ivey competing at the WSOP was in 2014. The man cashed in four events, including winning his tenth bracelet in a $1,500 8-Game event.

There is a strong clue as to why Ivey would return to the WSOP after a four-year absence in the interview with Cornelius. Ivey is wearing a Virtue Poker t-shirt, and with the online poker cryptocurrency platform of which Ivey is an ambassador for and investor in currently going through Alpha and Beta testing, it’s time for some good old-fashioned promotion.