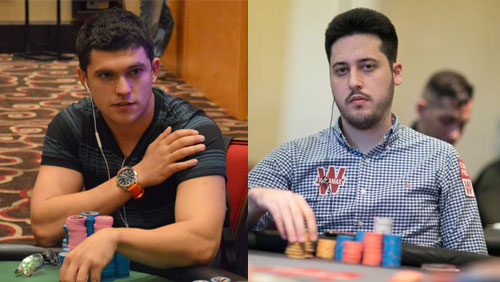 Some like the egg and spoon race. I was a three-legged race man. I would dig my fingers underneath Gary Sutcliffe’s armpits, and we ran like a racehorse, steam shooting out of our noses singing the hairs on our knees.

Valentin Vornicu is sick of the three-legged race.

The first time he reached the summit of the World Series of Poker Circuit (WSOPC) All-Time Gold Ring Leaderboard he had to dig his fingers into the armpit of Alex Masek. The second time it was the hairy pits of Maurice Hawkins.

The Romanian born star travelled to New Orleans for the WSOPC with the goal of earning enough points to qualify for the $10,000 Global Casino Championships and the shot of winning his first World Series of Poker (WSOP) bracelet.

According to the WSOP write up he’s almost there.

Vornicu told the WSOP press that he doesn’t play many WSOP events, preferring to chill at home. But with the seat so close, and New Orleans being so fucking cool, he had to take a punt.

It was a wise move.

Vornicu’s final table performance was giant-like. His opponents were tugging on his shorts like a little kid tugging on the hem of a mother’s skirt, desperate for something, anything – Vornicu gave them nothing but pain and heartache.

The final eight players hit the rail hard courtesy of a Vornicu shove, including the WSOP bracelet winner, Jonathan Hilton, who finished third. Victory for the 34-year-old means he is the undisputed king of the WSOPC for the first time in his career, holding 11 shiny gold things.

The Global Casino Championships takes place at Harrah’s Cherokee, Aug 7-9, and a bracelet will be up for grabs.

Mateos shunned the high roller action in Montenegro, preferring to promote his new sponsor, and it paid off. The Global Poker Index (GPI), Player of the Year, defeated 1,252 entrants to take the 1,000,000 (MAD) first prize – another remarkable win in a massive field for the talented young man.