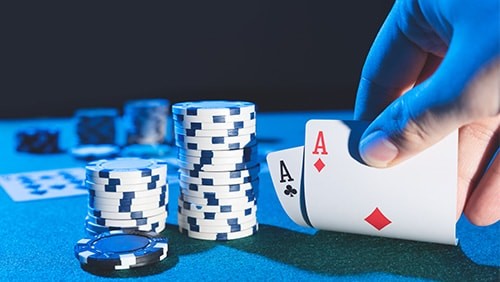 While the Aussie Millions action has been fantastic out in Oz and another winner was awarded a WSOP Circuit ring in Marrakech, the 2020 WPT Borgata Poker Open was proving that anyone truly can win a poker tournament worth life-changing money in a tournament that should inspire thousands to take up the game.

So often in poker, observers claim that ‘the game is solved’, or that if you’ve not studied for 10,000 hours by the time you’ve finished a University degree in advanced mathematics, then there’s no point taking it up; the kids are already way ahead of you.

While there’s clearly an incredible amount of value in boning up on the finer points of poker for as long as you can and starting early is a massive advantage to any player, this weekend has proved that an old(er) dog can not only be taught some very effective new tricks, but that those tricks can win you the kind of money that changes your life.

That must surely be true for the comparatively inexperienced silver-haired champion of the 2020 Borgata Winter Poker Open Deepstack Kick-Off, an event that would age even the most youthful of players merely by reeling off the title of the event itself. The cost? $600. The number of entries? A massive 4,375. The guarantee? Just two million dollars. If you missed out on playing this event are now kicking yourself from calf to calf, we get it. We feel your pain (metaphorically).

Having seen his first-ever no limit hold’em flop just a year ago, Zarko Mandic was $342,967 richer after the weekend of his life ended with him lifting the highly sought-after trophy and banking enough money to buy a house on Monday morning.

With just five figures of cashes in that year at the felt, there’s an element of Anthony Holden’s nomadic voyage into the unknown in the 1990 book Big Deal about Mandic’s ascent to the summit in this event.  Mandic had only ever played a blind man’s bluff version of five card draw in college. He’s six figures better off in his bank balance today, but how did he do it?

By the time Mandic “bluffed their brains out” at the final table, 22 players had already busted during the epic final day’s play. The final nine assembled with Patrick Luu needing to grow his stack to have any chance of victory. His all-in move with pocket nines saw Mandic make the call with pocket queens, and after holding through the board, Mandic took control.

Ryan Teixera would bust next, his pocket sixes all-in and at risk to the eventual runner-up Ricardo Eyzaguirre’s king-queen. A king on the river broke Teixera’s tournament heart, and although he went home with $42,945, he would finish seven places short of the win.

Jerry Maher had begun the day in the chip lead, but he couldn’t make the final six, busting in 7th place when his top pair by the turn crushed by Mandic’s flush. It was the start of a rush, his next victim being Leonard Sande. The sand ran from the top to the bottom of his egg timer when his final grains were in with ace-jack, Mandic calling to eliminate with pocket sixes, a devil of a turn coming a six to condemn Sande to his demise.

Mandic wasn’t finished there. Having the chips is one thing, using them to devastating effect is quite another, but that was what the New York native did as he first limped then emphatically called with pocket queens when Kirkwood Saccardo had moved all-in between those actions with pocket tens. The fact that Brian Morgan had also committed with jacks felt like a formality. Of course, the queens would hold. Of course, Mandic had busted two players just like that.

With three men remaining, the Canadian player Constantinos Psallidas needed to make a move to survive, but it would prove his downfall, making a stand with ace-seven, but seeing his all-in called by Madic with king-ten. If dread rolled down his spine, it had reason to, and Mandic hit on the turn.

With heads-up looking a formality, Mandic and his opponent struck a deal that left both men very happy. Eyzaguirre took $290,000, the biggest result of his career, and Mandic took the rest – $342,967 to be precise, as well as the famous trophy shaped like the venue itself.

If you’re worried that it’s took late to start playing poker and expecting results to come your way, remember what Zarko Mandic did in Borgata.