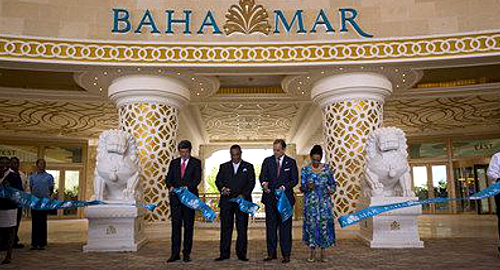 At long last, the Baha Mar resort casino in the Bahamas has opened its doors, but not before one last scandal hit the press.

Friday saw the soft opening of the first phase of Baha Mar, two-and-a-half years after its originally scheduled opening and over six years since construction first began on the $4.2b resort, the largest gaming project ever attempted in the Caribbean.

Baha Mar’s website is now officially accepting reservations for rooms at its Grand Hyatt hotel, although it won’t actually be accepting paying guests until May 29. Until then, only invited VIPs, media members, travel agents and a few fortunate locals will be checking out Baha Mar’s rooms. Baha Mar’s casino, golf course, spa and five bars and restaurants are also open.

Various dignitaries, including Prime Minister Perry Christie, were on hand for Friday’s ribbon-cutting ceremony. Christie earned an early nod for understatement of the year by referring to Baha Mar’s “tumultuous” path to this date, and felt the need to add that the opening was “not a mirage.”

The day’s events were spoiled by Friday’s call for Christie to sack his Education Minister Jerome Fitzgerald over the release of emails that showed he had lobbied Baha Mar’s original developer Sarkis Izmirlian to obtain contracts worth of millions of dollars for Bahamas Cargo & Logistics, a customs brokerage company owned by Fitzgerald’s family.

Bahamas Cargo didn’t win those contracts, and critics are wondering what role that rejection played in the Fitzgerald-led negotiations that saw Chinese conglomerate Chow Tai Fook Enterprises (CTFE) acquire Baha Mar after Izmirlian’s Baha Mar Ltd filed for Chapter 11 bankruptcy in 2015. Izmirlian had attempted to retain control of the project but was ultimately left out in the cold.

Fitzgerald has admitted having contact with Izmirlian prior to the bankruptcy filing but denied any impropriety. Opposition politicians have urged Fitzgerald to “do the honorable thing and resign” but Fitzgerald has so far remained unrepentant.

Christie’s government is facing a general election on May 10, making the likelihood of him kicking Fitzgerald to the curb at this late date highly unlikely. Regardless, it’s par for the course for the Baha Mar project that has had more twists a Mexican telenovela.