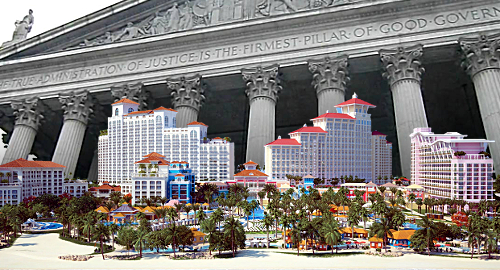 The ousted original developer of the $4.2b Baha Mar integrated resort in the Bahamas has filed a $2.25b fraud lawsuit against the property’s Chinese contractor.

As detailed in the Bahama Tribune, the suit filed on Tuesday accuses CCA of pulling off “one of the largest construction-based frauds in this hemisphere.” Among the allegations made in the suit is CCA purposely deceiving BML regarding the progress of construction, while earning “tens of millions, if not hundreds of millions” of dollars via inflated billings and uncorrected defects.

Izmirlian cites a $54m advance CCA received in November 2014 that was intended to speed up completion of the resort, but which the lawsuit alleges was instead used by CCA to help fund its purchase of a Hilton Hotel in the Bahamas capital, Nassau.

The suit further alleges that CCA had no intention of completing the work on time and on budget, but planned “to use the project as a massive training exercise for its young and inexperienced cadre of workers, which doomed the project to failure.” The suit accuses CCA of knowingly lacking “the qualified workforce or sufficiently senior managers needed to meet its representations and obligations.”

The suit claims CCA’s antics cost BML its entire $845m stake in the project, as well as “additional hundreds of millions in losses,” plus the future earnings potential of the resort, which finally opened for business this year after years of delays.

CCA allegedly was aware as early as 2012 that it wouldn’t be able to make its scheduled timelines, and used “work stoppages and work slowdowns” to disguise this reality “until it could negotiate its way out of the disputes it knew would arise, and concerning which it believed it had material exposure.”

The lawsuit doesn’t include any demands to overturn the sale of Baha Mar to CTFE, as Izmirlian threatened to do back in June. Izmirlian has previously accused the Bahamian government of unfairly shutting him out of the sale of the resort.

Coverage of the lawsuit in China’s state-run media outlet Global Times struck a defensive tone, saying it “may be too early to say CCA is innocent, but the company should not take full responsibility for the project delays.” The editorial also used the lawsuit to call for Chinese firms having a greater say in the direction of international projects.