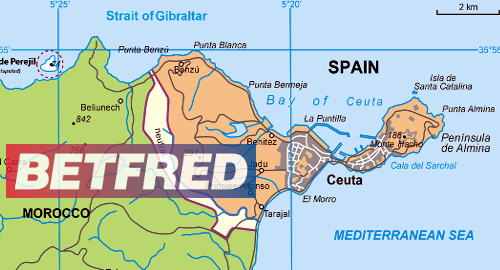 UPDATE: Betfred’s head of media Mark Pearson offered CalvinAyre.com the following statement: “We are not shifting our HQ in Gibraltar to Ceuta. I can confirm we are opening an additional office in Ceuta but our online HQ will remain in Gibraltar.” The original article appears below.

On Thursday, Gaming Intelligence’s Spanish-language site reported that UK betting operator Betfred had shifted its digital operations from Gibraltar to Ceuta, a Spanish autonomous city on the northern coast of Morocco.

The report of Betfred’s move, which was confirmed by local government officials, also named Spanish operator Suertia and Madrid-based gambling startup Mondobets as having committed to shifting their digital ops to Ceuta.

An additional four unnamed companies are reportedly preparing to announce their own Ceuta plans in short order. In order to qualify for Ceuta’s favorable online regime, operators need to establish their tax base in the enclave, as well as shift at least half their digital staff to the city.

Last week, Melilla scored its first success on this front after Spanish gaming giant Codere moved its digital betting brand Codere Apuestas to the city. Melilla vice-president Daniel Conesa said at the time that four other operators were in talks with the local government about a similar move.

Tax rates aside, many operators who currently base their digital operations in the British Overseas Territory of Gibraltar are likely eyeing the Spanish enclaves as a hedge against the debacle that is the UK’s Brexit strategy, which could see Gibraltar lose its preferential access to European Union markets. Similarly, Malta has emerged as a potential Brexit alternative for a number of operators, including William Hill.

On Friday, GamblingCompliance quoted Betvictor CEO Andreas Meinrad expressing hope that the UK could work out a satisfactory Brexit deal, adding that “we need it.” Meinrad said his company had no current plans to ditch their Gibraltar home but he worried about an ‘Armageddon scenario’ in which a future tax-hungry UK Labour government compelled UK-licensed operators to repatriate their digital operations to the UK.