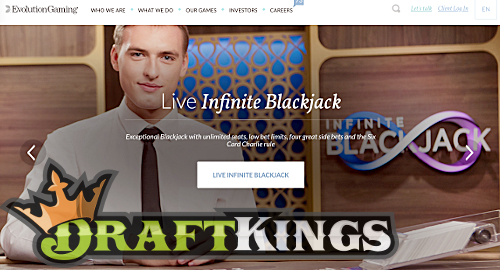 On Thursday, the Stockholm-listed Evolution announced that it had inked a deal to supply DraftKings with a live casino product from Evolution’s live dealer studio in Atlantic City. Evolution’s AC studio already provides live casino services to a who’s who of New Jersey-licensed online gambling operators.

DraftKings, which until last year was a pure DFS operator, has become a leading sports betting operator in many states where such activity has been authorized and was the first operator to offer online betting New Jersey. Last December, DraftKings’ New Jersey site debuted its online casino offering, the first time the company had offered any casino products anywhere.

Thursday’s announcement gave no hint on when DraftKings’ live casino might launch, and Evolution’s chief business officer James Stern would only say that his company would “very much look forward to working with DraftKings on this project.”

Evolution launched its New Jersey studio in August 2018 with the idea that it would serve multiple US intrastate online gambling markets, including neighboring Pennsylvania. However, that plan has been called into question following the US Department of Justice’s new view that the 1961 Wire Act applies to other forms of gambling besides sports betting.

Last Friday, the Pennsylvania Gaming Control Board warned its online licensees – none of which have yet launched their local operations – that it was “paramount” that their digital data didn’t stray beyond the state’s borders. Said data would include any signals beamed in from Evolution’s AC studio.

The DOJ announced a 90-day delay in enforcing its new Wire Act opinion to allow online operators the chance to bring their operations into compliance. New Jersey legislators have indicated they will use this delay to mount a legal challenge of the opinion and seek declaratory judgment that the opinion is contrary to the Wire Act’s clear intent.

In more positive Evolution news, the company recently completed the acquisition of live casino rival Ezugi. The deal, in which Evolution paid $12m upfront plus a maximum top-up payment of $6m, is expected to boost Evolution’s 2019 revenues by 2-4%.