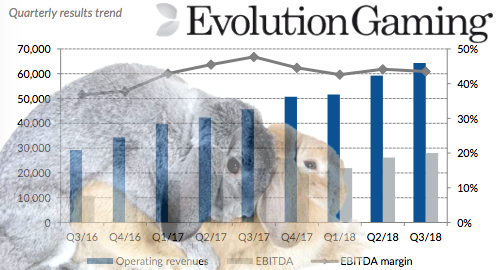 Carlesund called Evolution’s new Atlantic City studio “the main milestone” of the quarter. Carlesund further claimed that the response from clients and customers had been “positive throughout” and the development of Evolution’s offering has “exceeded our expectations during the initial phase.”

Evolution is viewing the New Jersey launch as “the start of a longer journey” in the US market. Pennsylvania’s intrastate online market is expected to launch early in the new year and Carlesund is confident that Evolution is “very well positioned” to take advantage of future intrastate opportunities as they arise.

This year has also seen Evolution launch new studios in the Republic of Georgia and the Canadian province of British Columbia. The company has tentative plans for a new studio in Malta, where all of Evolution’s international teams are located, at some point next year.

Evolution also plans to launch two new products before the end of the year; a revised random number generator (RNG) suite and Infinite Blackjack, which can accommodate an unlimited volume of players.