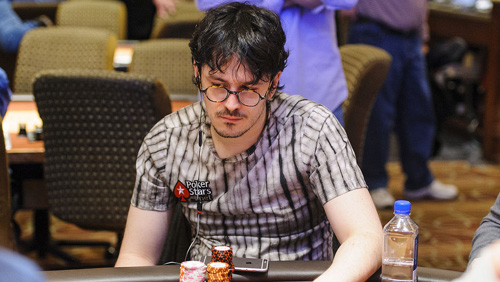 It’s 1.26 pm, and I have my back to the room. John, 80, sits in front of me with a great morning stubble. The only other regular is the girl shaped like perfection, looking like perfection, staring into nothingness with perfection. We are all typing away, making a living (or a dying, you decide), some of us doing it more perfectly than others.

I wonder what other people are doing in the world?

Yesterday, after he told me that he had lost 70% of his chips in the first 30-minutes of Day 1 of the Super High Roller Bowl V (SHRB), I suggested sticking to the Sunday Million (he finished sixth a few weekends ago).

He didn’t take my advice.

In a few hours, the Hedge Fund CEO, father, husband, friend, philanthropist, and poker enthusiast will sit down and play cards hoping to win £3.67 million, but more importantly than that, to have fun doing so.

Joining him are some of the best players ever to play this game.

Both of the Poker Central Triple Crown tournament winners of 2018 have reserved a berth. The US Poker Open winner, Stephen Chidwick, adds the tea to Shakerchi’s biscuits, and the Poker Masters winner, Ali Imsirovic is also in the pot.

The reigning Global Poker Index (GPI) Player of the Year (PoY) Adrian Mateos is also wiping his feet on the SHRB V Final Table Welcome Mat, as is the favourite to win the 2018 GPI PoY, Alex Foxen.

Rounding up the crew are two people representing the biggest online poker rooms in the world. Fans of PokerStars and effective altruism will be cheering on Igor Kurganov, and all of these superheroes begin peering up at the biggest stack of the final, partypoker’s Isaac Haxton.

So you know what they’re going to be doing.

You know what I’m doing.

And I know what you’re doing.

Two minutes and I’ll be finished with you, I promise.

The $300,000 buy-in event is the third SHRB of 2018 with Justin Bonomo winning the previous two for a combined haul of close to $10m. 36-players are involved in this one, making it the smallest SHRB field and prize pool in the short history of the brand. 27-players made it through to Day 2 with Rick Salomon holding the chip lead.

Alex Foxen opened to 27,000 from midfield, Dan Cates called in position, and Dan Smith moved all-in for 100,000 from the big blind. Foxen also shipped it for 127,000, and Cates made the call. Foxen couldn’t have been happier when his pocket tens squared up against the AK of both Cates and Smith, and a nine-high flop, turn, and river sent Smith to the rail, Cates took a hit, and Foxen tripled up.

The top two players in the Global Poker Index (GPI) clashed, and it was the #2 nursing the more severe wound. With 70,000 in the middle and a flop of QdQs2h, Peters check-raised to 58,000, and Foxen called. The turn was the 7h, and both players checked. The river was the Ts, Peters bet 150,000, Foxen moved all-in for 278,000, and Peters called. Foxen tabled QTo for the nuts, and Peters showed QJcc and was down to 9k, and those chips ended up in front of Rick Salomon when K7o failed to beat pocket nines.

Stephen Chidwick opened from UTG, Rick Salomon called in position, and both players called when Alex Foxen three-bet from the big blind. The dealer placed Tc8s4c onto the felt, Foxen checked, Chidwick bet 42,000, Salomon raised to 142,000, Foxen folded, and Chidwick called. The turn was the 3s, Chidwick checked, Salomon moved all-in, and Chidwick made the call. Salomon showed 96cc for all the draws in the world, and Chidwick showed T9ss for top pair and a few draws of his own. The 4d hit the river, improving the hand of neither player, and Chidwick doubled into the chip lead.

The likeliest man to win the inaugural Poker Central High Roller of the Year award didn’t add an SHRB title to his impressive 2018 resume. Alex Foxen opened to 11,000 in the hijack seat; Sam Soverel moved all-in for 113,000 in the next pew, Nick Petrangelo called from the small blind and Foxen folded. Soverel had an impressive hand (AKo), but nowhere near as impressive as Petrangelo’s (AA). The board changed nothing, and Soverel left the bowl.

The inaugural SHRB winner won’t be making it title #2 thanks to the pocket queens of Daniel Negreanu. Kid Poker opened to 12,000 from middle position, Dan Cates called in the hijack, Ali Imsirovic followed suit in the cutoff, and Brian Rast piled it in for 145,000 out of the big blind. Negreanu moved all-in, Cates and Imsirovic ran for the hills. Rast turned over ATo and never improved.

Alex Foxen raised to 14,000 from the button, Sean Winter three-bet to 55,000 from the big blind and Foxen called. The flop was 9h6c3d giving Winter top set, and Foxen an open-ended straight draw. Winter c-bet to 60,000 and Foxen called. The Qh on the turn handed Foxen flush outs, and he moved all-in after Winter had bet 145,000. Winter called, and it was the last play he made after the Ts hit the river to give Foxen the straight.

Nobody wants to play in a tournament with Fedor Holz so the remaining players must have been happy to see Daniel Negreanu finding a stroke of luck to send him packing. The pair got it in on Qc9h2h with Holz’s Q2cc leading the AsQh of the PokerStars figurehead. Unfortunately, for Holz, the board ran out runner-runner seven, to give Negreanu a stronger hand with queens and sevens with an ace kicker.

Two of the most successful players of 2018 clashed when Alex Foxen took out the man who won this event and the Chinese version earlier in the year. Justin Bonomo opened to 14,000 from UTG, Isaac Haxton called in the hijack, Foxen three-bet to 57,000 from the button, Bonomo moved all-in for 710,000, and only Foxen made the call. Bonomo showed A4hh, and Foxen showed pocket kings. The aces, fours, and hearts stayed in the deck, and Bonomo was not going to win his third SHRB title of the year.

Mikita Badziakouski opened with a raise from UTG, and Phil Hellmuth moved all-in from the big blind. Badziakouski made the call with AQ, and Hellmuth showed the inferior A8o. The board ran out K9954, and Hellmuth left the tournament a few spots shy of a payday.

The Name of Daniel Negreanu Erased by Stephen Chidwick

Stephen Chidwick bet 50,000 from UTG after staring at the 6c3s2d flop. Daniel Negreanu raised to 100,000, Chidwick made it 250,000, and Negreanu called. The turn was the 9d, Chidwick bet 150,000, Negreanu moved all-in for 444,000, and Chidwick made the call after burning through two-time chips. Negreanu showed pocket sevens but was behind the T9o of Chidwick who had hit a pair of nines on the turn. The river was the 4s, and Negreanu was out two spots from the money.

After three hours of bubble play, Mikita Badziakouski opened to 40,000 from UTG, Stephen Chidwick three-bet to 150,000 from the big blind, Badziakouski moved all-in for 625,000, and Chidwick made the call. Badziakouski showed AK, Chidwick showed TT, and the best hand won the five-card race.

The action begins at 4 pm (ET) on Wednesday 19 December where they will play down to a winner.