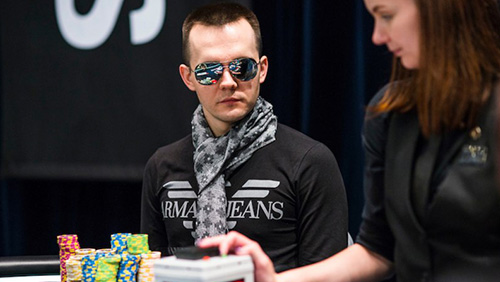 Everyone knows that Justin Bonomo has earned more live tournament dollars than anyone in 2018. But do you know who sits in second place?

The Belarusian is on a tear.

Badziakouski defeated a field of 54 entrants to capture the first prize of €1,650,300. The victory means he has now earned $12,411,966 this calendar year, good enough to top the annual money earned lists in three of the past four years.

Let’s see how he took it down.

And his exit in this one was brutal.

What more could Katz want?

The flush completed, and Katz was out in ninth place.

Then we lost Byron Kaverman on the bubble.

Matthias Eibinger played the role of assassin for the second time, and once again he came from behind to take the pot. The Austrian put enough money into the mixer to put the players in the blinds all-in. Byron Kaverman called from the small, holding A8dd, and Ahadpur Khangah folded the large. Eibinger turned over 87o and hit a seven on the fourth street to eliminate the American in the worst possible spot.

The first player to leave with some dough in his back pocket was Jean Ferreira after he moved all-in from early position, and Khangah made the call. Ferreira showed AJo, but Khangah had the cowboys, and they held.

Mikita Badziakouski doubled up through Eibinger when his pocket tens won a race against AQ.

Then we lost Rui Neves Ferreira in sixth place.

Khangah started things with a raise, Ferreira three-bet to 500,000; Khangah called. The flop rained down Ks9h8s, and Khangah check-called Ferreira’s all-in for 150,000. Ferreira showed pocket queens, but Khangah had him beat with KQdd. Neither the Ac nor the 3d helped Ferreira, and he was out.

The former November Niner was next to fall by the wayside.

Timothy Adams opened to 160,000, Eibinger raised to 460,000, Benjamin Pollak four-bet to 860,000, Adams folded, and Eibinger made the call. Pollak showed AJo; Eibinger showed 86cc, and an eight on the flop followed by a six on the river sent the Frenchman packing.

And then there were three.

Eibinger stuck a stack in the middle big enough to deliver a fatal blow to anyone willing to take a punt, and Adams made the call. It was a flip with Eibinger holding KQcc and Adams holding pocket eights. Eibinger flopped a flush, and a turn and river card later, the Canadian was out.

Then a critical moment when Badziakouski doubled through Eibinger for the second time. This time the hands switched with Badziakouski holding AQ, and Eibinger holding TT. The Belarusian hit an ace on the turn, and the pair were neck-and-neck at the top of the chip counts with Khangah in third.

Mikita Badziakouksi would take on Ahadpur Khangah, heads-up, for the title, after the Iranian removed the starting day chip leader from the equation.

Khangah limped on the button, Badziakouski called from the small blind, and Eibinger checked in the big blind.

The Austrian was ahead with two pairs.

The jack gave Khangah a bigger two pairs, and the 5d on the river maintained the status quo. Eibinger, the table captain for so long, was out.

Badziakouski had the chips.

Badziakouski had the experience.

There was only ever going to be one winner.

Khangah did take the chip lead briefly, during hand 2 of their little tussle, but Badziakouski took a big lead in the following hand.

Khangah limped from the button, Badziakouski raised to 350,000, and Khangah called.

Khangah once again checked out of turn. Badziakouski put a meaty looking 2 million bet across the line, and Khangah made the call. Badziakouski showed AK and had Khangah’s KQ beaten.

And then came the final hand.

Khangah limped from the button, and Badziakouski checked his option.

Badziakouski had turned two pairs to take the lead ahead of the Iranian, and the 7h on the river changed nothing.

Badziakouski was our champion, a feeling he is getting used to.