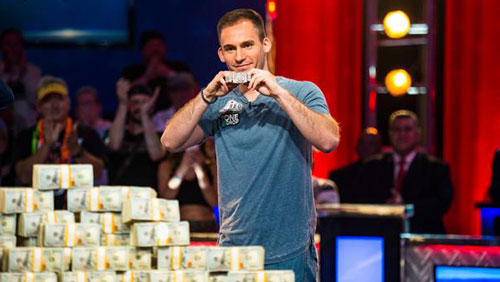 Justin Bonomo wins the Big One for One Drop for $10m, taking his 2018 earnings to the $25m mark, and replacing Daniel Negreanu as the All-Time Live Tournament Money Earner with close to $43m locked up in a vault somewhere.


At the end of 2017, when us writers are struggling to find something to write about, I wrote one of those ‘predictions’ articles that end up in Google Ghost Town.

I predicted that Daniel Negreanu would not be sitting at the top of the All-Time Live Tournament Money Earned list. In his stead would be Erik Seidel. The theory was simple and yet stable. Seidel was a high stakes regular. Negreanu, not so much.

I got part of that prediction right.

Six players remained from the 27 that paid $1m to play poker. A fact that is still as incredulous as getting caught up in a Twister and waking up knowing your house has flattened a witch, and the only way to get back home is to follow a yellow brick road.

Leading the way was Justin Bonomo, a man who I suspect stole the brain from the Scarecrow, the heart from the Tin Man, and the courage from the Lion. You never get to see the young man’s feet, but it wouldn’t surprise me to see a pair of ruby slippers.

2018 has been a road paved with gold for Bonomo.

The poker table is home for Bonomo.

Act 1: The Position Nobody Wanted

Here was the position at the starting blocks:

Due to the low turnout, only five players would see a return on investment.

That meant one person would leave with nothing, a harsh reality when you consider the razzmatazz of making the final table.

When the guillotine dropped, the head that rolled around the Thunderdome belonged to David Einhorn.

“I almost feel guilty for knocking out David Einhorn,” Bonomo told PokerNews. “I will give a lot to charity, but I’m not as well off to give it all to charity.”

Bonomo was referring to the likelihood that if Einhorn had won the $10m top prize, the Hedge Fund manager would have donated the lot to charity as he did in 2012 when he finished third for $4.3m.

So, it was ironic, that in a tournament created to help reduce suffering in the world, the man who could have made the most significant impact left with nothing but a free seat in a Blueman Group concert to show for his million dollar investment.

Einhorn opened to 1.1m on the button, and Justin Bonomo called in the big blind. The flop was a lowly looking 7c5c5h. Bonomo checked Einhorn bet 1.6m, and Bonomo check-raised for 7.5m, and that was enough to put Einhorn into the tank for his tournament life.

One time bank chip went into the middle.

The cards were on their backs in no time. Einhorn held AQo, and Bonomo was ahead with 74o. The 2h and Kc finished the action, and the remaining five players were in the money.

Act 2: The Rise of The Lucky German

With Einhorn out of the way, the remaining five players could drop their shoulder at least an inch. Even the most disastrous day from here on in would end in a $1m profit.

Every one of the remaining players had earned a million dollars profit before, including Fedor Holz, the poker player most who know nothing about poker believe is the luckiest player in the world; and he took charge of proceedings after a double knockout, in the hand of the night.

Byron Kaverman moved all-in for around 8 million under the gun. Holz made the call in the next pew, and Rick Salomon jammed for 26.9m out of the big blind; Holz used four-time extensions before making the call.

Kaverman turned over Ac5c, Salomon showed AhKh, and Holz was ahead with two black tens.

The flop propelled Salomon into the lead with two pairs.

The Poker Gods couldn’t have delivered a better card. Salomon remained ahead, but Kaverman had a flush draw, and Holz added four jacks to his two ten outs.

Holz hit one of his outs and took a big chip lead. Kaverman had the shortest stack, so left with $2m, and Salomon picked up $840,000 more.

Holz extended his lead, at one point as wide as this:

The German star was running away with it.

Then we lost Dan Smith.

Act 3: The Man With the Ten Gallon Hat

I don’t know much about Fedor Holz’s philanthropic endeavours, he keeps those cards close to his chest, but I do know that ‘service’ is one of his core values.

Bonomo is a Raising for Effective Giving (REG) Ambassador, so we know where his allegiance lies. And Dan Smith is of similar ilk. Although Smith doesn’t share the same official link to REG, he has donated millions to the same effective charities.

And here he was, with the minimum of $4m heading into his coffers, dressed in a smart blue jacket (WSOP Main Event players take note), and lost in the most massive ten-gallon hat I have ever seen. Forget hoodies; they only cover your eyes. This bad boy covered Smith’s entire frame.

Holz folded, Bonomo moved all-in, and Smith made the call for his tournament life. Smith turned over QTs, but Bonomo was streets ahead with the dominating KTo. The Ad9s6s did give Smith some runner-runner possibilities. The Js was a lovely card for Smith, giving him those flush and straight outs, but the Qh turned out to be the wrong type of royalty, and Smith was out.

In 2011, Erik Seidel won $6.5m, and people got down on their knees and paid homage to the most magnificent heater known to man. Then, in 2014, Dan Colman, aided by his win in the Big One for One Drop, won $22.3m in a single year. The poker world had gone bonkers. Then in 2015/16, a young man from Germany enthralled the poker world by winning more than $19m in a 12-month span. Two years on, and Justin Bonomo put together a run of victories, and big time cashes that saw him earn $15m in seven months.

And here they were.

Two favourites of the Poker Gods.

The Tale of the Tape

Then Bonomo began to make a fist of things, doubling through the Primed Mind creator, A8>44 when an ace on the turn saved Bonomo’s skin.

And the double up seemed to inject a new level of confidence in Bonomo who went on a run that saw him pull close to level with Holz 69.3m v 65.7m.

Then the pivotal hand of the competition.

Holz showed KJo for the bag of bones, and Bonomo showed 84s for eights up, and with that hand, Bonomo took control with a 110.4m v 24.6m chip lead. 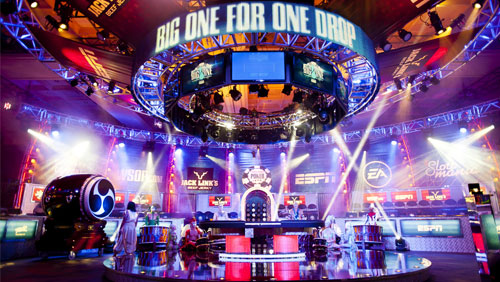 Bonomo was in charge, and at one point, Holz went as low as ten big blinds before doubling with QTo>K5o, when a queen arrived on the turn, and then he doubled up for the second time when J4 found a jack on the flop to beat the pocket tens of Bonomo.

Holz had some heat, but there was still a lot of work to do.

It was a renovation project that remained unfinished.

Bonomo limped on the button, Holz moved all-in for 23.6m, and Bonomo made the call.

Bonomo had Holz in a chokehold.

The dealer fanned out the K832Q board, and Bonomo had taken down the most significant single prize of 2018.

Victory for Bonomo sees his 2018 earnings rise to $24,945,435, surpassing the record annual haul of Colman, and propelling him to the top of the All-Time Money Earned Rankings with $42,979,591 taken from poker tables around the world.

And we still have five months of the year remaining.

The yellow brick road is long.

Legend has it when you get to the end, there lives a wizard, but I think this story has had enough of wizards, don’t you?