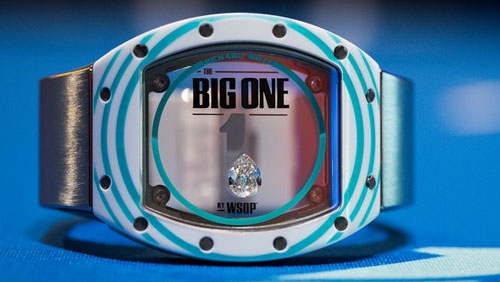 A round-up of all the Day 1 action from the $1m buy-in Big One for One Drop live and direct from the World Series of Poker including a chip lead for Rick Salomon and five people going to bed with a headache.

After the Little One for One Drop raised $525,000 for the One Drop Foundation, it was time for Big Brother to chip in.

After a disastrous move to Monte Carlo in 2016, the $1m buy-in Big One for One Drop returned to its spiritual home of Las Vegas determined to save lives en masse all over again.

Each player donated $80,000 to the Foundation, and with 24-players competing in the first 10-Levels of Day 1, poker has safely secured $1,920,000 for people who are struggling to gain access to clean water. Let’s hope we double that by the end of Day 2.

There was a familiar face at the top of the chip counts after a bright opening. Rick Salomon is one of two players fortunate, and skilful enough, to make two One Drop final tables, and Pamela Anderson’s former beau, will return on Day 2 as the man in charge.

Phil Ivey is close behind, as is Daniel Negreanu.

If I were a betting man, I would have a few quid on these lads.

Jason Koon and Mikita Badziouski earned enough to buy a small country during the Triton Poker Series in Montenegro, so they go into this thing on top form.

Nick Petrangelo won the $100k High Roller recently and finished third in the $50k a few days ago. Justin Bonomo won the Super High Roller Bowl in China and Las Vegas, as well as taking down the $10,000 Heads-Up Championship.

Stephen Chidwick and Adrian Mateos have been #1 & #2 in the Global Poker Index (GPI) for as long as I can remember, and you can’t look much further than Fedor Holz when it comes to a big buy-in champion.

Here are the deets.

David Peters was the first to have the headache of busting out of a million dollar buy-in event.

The turn was the 4s, and both players dismissed it like a tired cat rejecting a playful mouse.

The river was the 4c, Peters tapped the felt, Mateos bet 150,000, Peters check-raise jammed for close to 2m, and Mateos called. The Winamax Pro turned over K9s for the second nut flush, and Peters showed Td9h for the flopped two pairs.

Christoph Vogelsang opened to 65,000 from Under the Gun, Talal Shakerchi called in the cut-off, and Jason Koon raised to 265,000 from the button. Antonio Esfandiari four-bet to 1,025,000 from the big blind, Vogelsang and Shakerchi folded, and Koon expended a time extension chip before putting Esfandiari all-in, and the Magician called.

None of them was a rocket.

Esfandiari will not be going to the moon.

Ike Haxton is the man when it comes to making the final tables of the most significant buy-ins in the world, but Mr Consistency will not be following a similar path here.

Haxton put it in preflop holding KcQd against the AhQc of Cary Katz. The runout produced no surprises, and the partypoker pro was out.

Stephen Chidwick, who had earlier doubled through Dan Smith, did it again, this time finding queens at the same time Vogelsang looked down to see pocket jacks.

And then Phil Ivey brought the axe down on the back of Bryn Kenney’s head.

Negreanu opened to 200,000 from midfield, Kenney called from the hijack seat, Matthew Siegal called on the button, and Ivey duly obliged from the big blind.

Ivey checked, Kenney moved all-in for 2.5m, Siegal snap-folded, but Ivey called with J8hh for the straight. Kenney showed ATd for a pair and flush draw, but the 9c offered no such solution for the GGPoker ace.

Ivey didn’t have time to hide the murder weapon, so he used it again, this time bludgeoning the head of Jake Schindler. The action folded to Ivey who called from the small blind with AKo; Schindler moved all-in from the big blind with QJs, and Ivey called, flopped an ace, and that was the end of that.

Justin Bonomo doubled through Nick Petrangelo QTs>AKo when he flopped a ten. Mikita Badziakouski doubled through Fedor Holz after turning a set of deuces after the German flopped top two pairs. And that brought Day 1 to an end.

Registration remains open until the first card is dealt on Day 2, and any players joining late will begin with 50 big blinds. Dominik Nitsche told PokerNews that he hoped the field would reach the cap and that there were several pros still considering hopping in at the last minute.