Esfandiari shows why he’s the boss on Poker After Dark

March must be the month for incredible poker decisions. It was only a week and a half ago that Ian Steinman laid down his trip Kings in an amazing call at the WPT Rolling Thunder Main Event that saved him from losing a huge pot to a straight held by his opponent, Joe McKeehan. That decision allowed him to go on and finish second in the tournament to take home just over $201,000. In the latest head-scratcher, Antonio Esfandiari called a monstrous flop bet that left everyone understanding why he’s called The Magician. 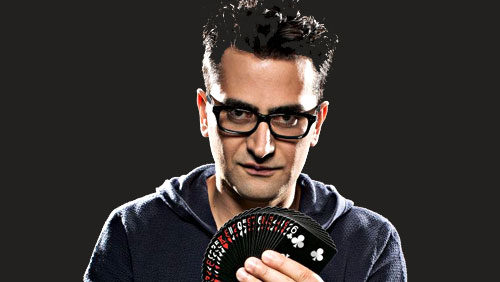 Let’s start by setting the stage. Esfandiari was playing in some late night poker on Poker After Dark that included celebrities like Don Cheadle, Randall Emmet and Jennifer Tilly. During the course of the action, Tilly found herself looking at pocket aces and Cheadle was staring down at a fairly strong A-10 hand. Esfandiari’s Q-J off-suit was certainly a decent hand, especially when playing in position.

Pre-flop bets were made, with no one jumping out to show strength. A flop of 8-A-10 gave both Cheadle and Tilly a killer hand, with both ready to pounce at the right minute. Tilly led off with a small $10,000 bet, possibly intending on slow playing her set of Aces. Esfandiari, who had a comfortable lead with $370,000 but no connectors, called. Cheadle was certain that his two pair made him top dog, so he raised to $43,500. Tilly responded by moving all in with $94,000—and Esfandiari actually called the bet. Cheadle was pot-committed and not insecure about his cards, and responded by moving all in.

It needed to be pointed out that Esfandiari was only in the hand at this point for $15,000—far off the size of the bet and with no greater than a 27% chance at finding a connector. The three-time WSOP bracelet winner isn’t known for shying away from a pot, though, and he was there to gamble.

A 7 on the turn provided no help to anyone, and Tilly was feeling even better about taking the monster pot. However, the river would provide the greatest suckout for Esfandiari. A King surfaced, giving the poker pro his straight, and the $283,000 pot. If it helped any, he actually apologized to Tilly for stealing the hand.