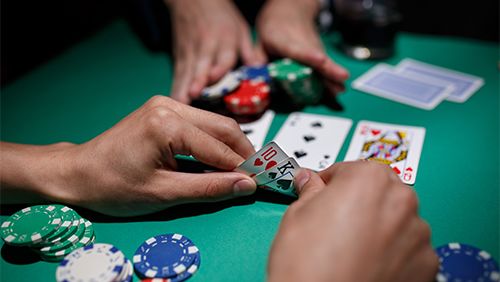 The third and final heads-up battle between Phil Hellmuth and Antonio Esfandiari took place last night on Poker Central’s PokerGO streaming service and after eight levels of top quality action, it was The Poker Brat who emerged as a 3-0 winner, taking home $400,000 after winning three in a row against one of his oldest frenemies.

Hellmuth taking on Esfandiari has been the perfect way to start the new series High Stakes Duel on PokerGO, and with less original poker content around than normal due to the Coronavirus pandemic, Poker Central should take a bow for the series. The concept is very simple; both players put up an amount, which starts at $50,000 in Series 1, before that amount doubles with each rematch. If a player wants to quite either while behind or ahead then another poker player can step into the hot seat and take up the challenge.

Hellmuth had gone 2-0 for the first two bouts with Antonio Esfandiari, known as ‘The Magician’ since he used to be part of the Magic Circle. It was Hellmuth who played tricks with his opponent across the first two rounds of the High Stakes Duel, however, and he was going into the match with a lot of confidence. As we found out in the ‘Weigh-In’, hosted by Nick Schulman, it was perhaps Esfandiari who was feeling the pressure.

“You win the first two and it’s huge,” Esfandiari said in the pre-match show which acts as the ‘trash-talk’ section of the heavyweight bout. “If I win the third one, I’m actually up more money. I used to care about the glory. These days, I care way more about the money.”

“You know what pisses me off?” Hellmuth said when asked about his reputation or otherwise amid high stakes players after receiving a volley of criticism from Oliver Busquet last week on Twitter. “What pisses me off is that these kids, they couldn’t see my hole cards for all those final tables. For all those championships.”

You can watch the weigh-in for free and in its entirety right here:

With the talk over, the action could begin, and it was Hellmuth who went on a charm offensive, hugging his opponent before the match could get under way. Once it started, a couple of bluffs on the river were called by the 15-time WSOP bracelet winner Hellmuth, who edged into an early lead.

Things got worse for Esfandiari before they got better. A made set for Hellmuth and trips against two pair saw The Magician desperately reaching into the metaphorical top hat for a rabbit.

When Hellmuth won a huge pot on the river after raising Esfandiari off the hand when Hellmuth himself held a flush, Schulman commented “I think Antonio’s soul just left his body.” from the commentary booth. Esfandiari was dejected.

“I just can’t beat you Phil.” He said, calling to see another big pile of chips pushed towards Hellmuth, who had established a 3:1 chip lead. Despite battling back a little, Esfandiari would never regain the lead and found himself all-in with ace-three for 43 big blinds. Hellmuth made the call with ace-ten and while the board looked for a while like it might lead to a chopped pot, with nine outs to that eventuality being available for the river card, the fates didn’t save Esfandiari and Hellmuth had the win.

Despite his undefeated back-to-back-to-back heads-up victory in the High Stakes Duel, Hellmuth didn’t feel like he in any way had the edge over his opponent.

“He’s just a great player and he’s beat me lots of times in lots of tournaments. I don’t really consider that I have the edge. It feels more like I’ve evened it out between us. Maybe I’m ahead a little bit. I’m just glad it’s over because Antonio is just a great player. I’m ready to hang it up.”

Hang it up Hellmuth did, ending the battle not just for Esfandiari but himself too, taking the $400,000 and quitting while he’s ahead. While he won’t face off against a new opponent in Round 4 of the 8 scheduled to play out, Hellmuth is keen to kick of Season 2 of the show.

“I hope that somebody else challenges me for $50,000, and I’ll try to win another three-in-a-row. There are some great players out there that want a shot. I hope I can open Season 2, but we’ll see.”

Who’ll take to the High Stakes Duel felt next? You can rely on one thing that we’ll tell you exactly what happens here at CalvinAyre.com

You can watch the third and final High Stakes Duel between Phil Hellmuth and Antonio Esfandiari right here on PokerGO (subscription required).