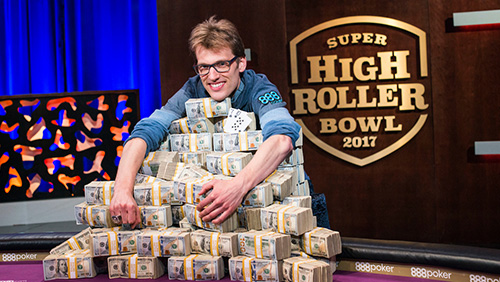 In the past four years, Christoph Vogelsang has competed in the highest buy-in live tournaments without ever winning a single title.

That all changed dramatically after the German pro, overcame a 2:1 chip deficit (twice) to defeat the overwhelming favourite Jake Schindler in heads-up action to bank the $6m first prize, and his first live tournament title, in the 2017 Super High Roller Bowl (SHRB).

Schindler will need some time to get over this one. The American had Vogelsang out on his feet on two separate occasions only for the river to come flooding in and drown him each time.

56 players entered the event, and at the start of the final day, only three began.

Here is the round up of action before today:

The day began, rather predictably, with Stefan Schillhabel moving his 15bb stack into the middle of the purple baize at every opportunity he could get.

After chipping up to 1.4m, Schillhabel got it in with Ajo and found a caller in the shape of Vogelsang holding QQ. Schillhabel flopped a Jack but there was no more aid on either the turn nor the river, and he was out earning $2.4m.

Christoph Vogelsang would take on Jake Schindler for the title.

Schindler then fought back to take the chip lead 14,100,000 v 2,700,000 after winning a series of hefty pots, and the American must have thought that the $6m and the title was his, but Vogelsang once again found that lucky river card when he needed it most.

Vogelsang limped the button holding A5o; Schindler raised to 500,000 holding pocket eights, and Vogelsang called. The German then called bets of 275,000 and 900,000 when the flop and turn fell 8c3c2hQh, and then moved all-in, and was called, at the sight of the 4d river making him a wheel to beat Schindler’s set.