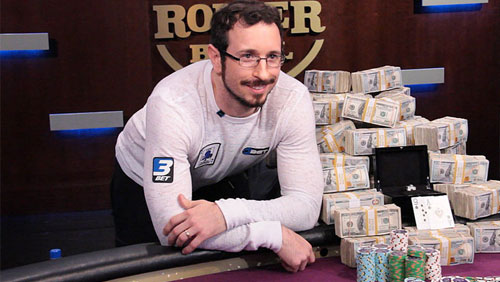 A quick round-up of the second day of action in the $300,000 buy-in Super High Roller Bowl including an update on the trials and tribulations of one Kevin Hart.

Had anyone else screamed, fist pumped and humped the table like Kevin Hart did during the Super High Roller Bowl (SHRB) the news media outlets would be writing a whole different set of headlines.

The man who has vowed to make poker fun again was the star of Day 1 when he eliminated Phil Hellmuth.

“I am one of the best players in the world.” Hart told Poker Central in an interview, “I did some best player stuff, today.”

Hart was one of 44 players preparing to return for Day 2 in search of the $6m first prize, and his Day 2 was even more eventful than Day 1, this time taking the scalp of the 2016 SHRB Runner-Up Fedor Holz.

Before Holz felt the wrath of Hart, Brian Rast also felt the power of the comedian when the pair got it in on a Qc8c6h flop in a single raised pot, with Hart holding 97cc for the flush & straight draws, and Rast ahead with ATcc for the overcards and the flush draw.

Kevin Hart’s face as he waited for the dealer to burn and turn the fourth street said it all. There stood a man who wanted to win this competition, badly. He hadn’t turned up to be the comedian at the table, he loves the game and is as competitive as they come.

The 5h hit the turn; the river bricked for Rast and Hart celebrated with a lap of honour before dry humping the table.

But Rast would have the last laugh when a short-stacked Hart moved all-in holding Ajo, and the 2015 Champion picked him apart with pocket kings.

It was a great run.

It will make for great TV.

But something tells me that the players will be more than happy to continue the rest of the tournament in silence.

Other players who melted away like icicles hanging in front of Kevin Hart’s mouth were the former One Drop winners Dan Colman and Antonio Esfandiari, and the current Global Poker Index (GPI) Player of the Year leader, Bryn Kenney.

Aria High Roller experts Isaac Haxton, Scott Seiver and Tom Marchese also failed to find a genie in their lamp when they needed one the most.

The 2016 fifth-place finisher Matt Berkey failed to make it to Day 3, as did 888Poker Ambassador Dominik Nitsche, and the reigning GPI Player of the Year, David Peters.

The best tournament player in the world right now is Nick Petrangelo, but he won’t be adding any points to his GPI score after his Day 2 demise, and the diodes went out in the poker life of the only female player to enter, Lauren Roberts, and the politician Tony G.

Justin Bonomo, who warmed up for this event with victories in the $10k & $50k Aria High Rollers, leads the way with 1.6m in chips. The only other player exceeding the two million mark is the Day 1 chip leader, Byron Kaverman.

Four players hold seven figures in chips, and three of them are part-timers with Dan Shak (1.48m), Bill Klein (1.46m), and Leon Tsoukernik (1.3m) in with a chance of taking the $6m from the pros. Christoph Vogelsang is the only pro with 1m+ in chips bagging up close to 1.4m.

Our two former champions are still in contention for title number two. Kevin Hart’s murderer, Brian Rast has 526k, and Rainer Kemp is not that far behind with 487k. The current WSOP Player of the Year, Jason Mercier is hanging in there with 243k, and propping up the table is Kevin Hart’s partner in fun, Daniel Negreanu with 225k.

Here are the top 19 chip counts in full:

Day 3 resumes at 1 pm local time, and you can catch the live updates for free at PokerNews or pay to watch the action live on PokerGO for a mere $9.99.