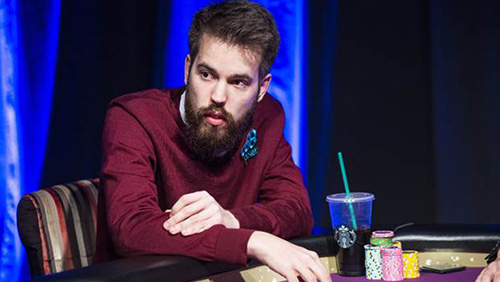 Lee Davy sits down with Dominik Nitsche during his foray into 888Live Barcelona to talk about his upcoming appearance at the Super High Roller Bowl, his relationship with 888Poker and much more.

The first time I saw Dominik Nitsche, he was sitting at a poker table wearing a grey short sleeve t-shirt, an old pair of jeans that exposed his underpants, and a scruffy pair of trainers.

His left arm lay perpendicular across his chest, fingers gently caressing his shoulder; eyes fixed on his prey, riffling chips with the outstretched fingertips of his right hand.

It was 2010, he was 20-years old, and I was working my first live gig. He had my attention because I didn’t know a single player and one of the reporters told me he was mustard.

I thought he was more
tomato ketchup
than mustard, but appearances aren’t everything.

Seven years later, and here I am, standing on the rail of the €2,200 buy-in High Roller at 888Live Barcelona. Nitsche is wearing a grey short sleeve t-shirt, a pair of jeans exposing his underpants, and a scruffy pair of trainers.

Everything seems the same, and yet I can’t help feel that everything is so different.

He rivers a flush against Gordon Huntly; gets paid, and collects his chips. It’s break time. Nitsche gets up, his jeans fall down, and we get talking amongst the furious sounds of the slot machines that rather worryingly remind me of my child’s toys.

On May 28, Nitsche will take his seat in the $300,000 buy-in Super High Roller Bowl (SHRB). It’s an amount that makes you think of a house, not a poker game. Knowing his studiousness, I ask if he prepares differently for an event of this magnitude?

“I won’t prepare specifically for this event,” said Nitsche.”I play online every day and study during my downtime. I don’t need to prepare for one tournament. It’s more important to try to improve at poker in general. It doesn’t matter what tournament comes up; poker is still poker. There are some top quality players in the $300k that’s for sure, but at the end of the day it’s just about playing poker – so for me, this tournament is the same as any other. I just hope I get lucky in this one.”

I wasn’t expecting that reply.

Nitsche has the work ethic of an old Welsh miner. I assumed he had been breaking down this game for months.

A few weeks ago, I interviewed the 2016 SHRB fifth place finisher Matt Berkey who informed me of his intention to prepare diligently for the 2017 edition. I mention this to Nitsche to gauge reaction.

“Matt Berkey isn’t a tournament player, specifically,” said Nitsche. “He plays in the highest live cash games, so it makes sense to prepare because this could be his one tournament. Tournaments are all that I play. If I don’t cash in the SHRB, I have the Aria High Rollers and the One Drop to play.

“It’s a nice tournament – it’s great. But I am not going into it thinking, ‘This is the one tournament.’ That’s not how poker works. You can’t just pick the one tournament you are going to win. There are a lot of fantastic players such as Fedor {Holz} and the rest of the German crew around us, and I would like to think we are the best prepared in general because we play all the high rollers, and talk poker, and have worked on some cool stuff.”

Poker is a perplexing paradox. The very best often rise to the highest echelon. And so many who could be the best don’t have the financial muscle or don’t want to place their financial foreskin under the surgeon’s scalpel. I ask Nitsche for his view.

“There aren’t too many pros who are too good to play a $5k. Once you get to $10k & $25k, you start filtering out the lower tier pros, the ones that are good but not world class. Once you get to $50k+, that’s where you start sitting down with the best of the best.

“The SHRB is slightly different because it contains a lot of amateurs and it’s rake free – two reasons for weaker pros to take a shot because they will be able to sell a lot of action. In that way, you can say, that this is one of the softest high rollers of the year. More so than the One Drop and the Aria $50k high rollers for example. If you are not playing at the highest level, nobody is going to stake you for a $50k Aria re-entry tournament.

“The SHRB will be pretty reasonable to play. The best of the best are in there, but fortunately, a few of the better players didn’t make it. Adrian {Mateos}, for example, didn’t and I don’t think Sergio {Aido} did. If those types of players don’t make it in, then it’s automatically softer, and it makes it easier for me to win.”

I am temporarily distracted by the sight of a morbidly obese lady, wearing an awful wig, morphing into a chair designed for Kate Moss, watching horse racing, tennis and cycling. I have a random thought of her using Dominik as a toothpick, dislodging a piece of pizza that is the size of a pizza, and it springs my mind back into life.

“Where you do rate yourself within this hierarchy?” I ask him.

“I like to believe I am part of the elite because I am still in these tournaments with people backing me after years of not cashing,” came his reply. “That’s the problem with these tournaments: even if you don’t cash for a while or go on a heater like Fedor or Steve O’Dwyer, and all these guys who run well. At the end of the day, you don’t know if they are the best of the best. We are playing tournaments of 50 people tops, and it’s easy to go on an insane heater. They probably are very good, and I have a lot of respect for those guys, but are they much better than the field? Probably not.”

Nitsche’s words send the cue ball like head of Stephen Chidwick racing into my mind. Chidwick has won a lot of money playing against the best in the world, but his trophy cabinet is still a little dusty. Compare Chidwick’s results with O’Dwyers, and you need to move from a one-bed to a two-bed property just to house all of his trophies, and yet the margin between the two is a few flops, turns and rivers.

“Stevie is the best,” says Nitsche with a look of sincere admiration groaning from beneath his beard. “I’ve been poking fun at Stevie for years. Steffen Sontheimer does great as well. And then, when it comes to people who don’t have results in these things I would pick myself. At the other end of the spectrum you have Fedor who gets all of our results, but, that’s tournament poker.”

Before I dragged Nitsche off into my little corner and jabbed a Dictaphone into his face, he was sitting on one of three tables hoping to win the €40,000 first prize.

It was quiet; nobody engaged in conversation. People stared at the board or the someone’s temple. It was all rather tedious; boring, and not inspiring at all. It was no different to the guy who wakes up every morning and spends the day slowly dying in his cubicle.

“Is this a job?” Says Nitsche. “I don’t know what this is? I have never had a job in my life, and I don’t think I ever will. I love poker. It’s fun. I have stopped grinding online tournaments, and I am trying to become one of the best in the high stakes cash games. I play a lot against Nikita {Bodyakovsky} Fish2013. He is really good online. I enjoy our battles. The feeling of being able to compete against this type of player is driving me to get even better. I have grown out of battling the tournament scene, that’s not a challenge for me anymore. I want something new, and high stakes games, in general, is where my focus lies.”

“I don’t find it difficult because poker is still poker. It’s easier to pick up things that people do wrong now I have played with the best. One thing you notice when you play lower stakes is it doesn’t matter how much you bet people will call you, and that doesn’t happen at the higher stakes.” Says Nitsche. “People make such glaring mistakes in these lower stakes tournaments. It becomes super obvious, much more than a year ago. I sit there trying to pick people apart. So it’s no different than a high roller except I have to look harder in a high roller to find something.

“Poker is poker. That’s how you play the game. You see someone playing a hand badly, and then you try and figure out why? What is wrong with their thought process? Where did they go wrong? Which concept don’t they understand? Sometimes it can be super obvious. Other times it’s a tiny thing like they bluff catch with the wrong hand, or their blockers don’t make sense for a particular action so that means they don’t understand the concept, or it could be something incredibly obvious like they are opening seven-deuce offsuit under the gun.”

Each time I juggle the $300
k figure in my head, the numbers fall like shards of glass.

“Yes the buy-in is higher, but at the same time my bankroll is a lot higher,” Nitsche points out. “I’m not emotional when I play. I like winning. Winning is a lot of fun.”

And what about bankroll?

“I think I am rolled for what I play,” says Nitsche.”I have money coming in from other sources. I can afford to be a bit aggressive. Everyone knows the pros have their swaps. Nobody has 100% of their action. If at any point the money matters you are not playing your best. I like to be robotic when I play. Poker decisions are poker decisions based on the info I have at the table and the payout structure in terms of buy-ins. The actual money is irrelevant. I don’t think the money will ever effect me.”

I have always found Nitsche to be a very confident young man, even back in 2010, but he is different, today, and it’s much more than the added growth of his bushy beard.

I wonder if it’s the responsibility of representing a brand?

“It’s fun. I enjoy it. I like helping create exciting online offerings,” Nitsche says of his relationship with 888Poker. “I can help steer them in what I think is the right direction. The 8-Team concept should be fun, and there is a lot of cool stuff that’s coming up that I can’t reveal just yet.

“The $5k online high roller was a big success, and I’m looking forward to designing the next one. I’m always the first point of contact for the online generation. When they have a problem with their account, they come to me, and I like that. I like being involved in all the promotional stuff and having my photo taken. It’s not just about playing poker anymore. I love battling and competing, but I also love representing a great brand like 888Poker.”

And with that, the clock on the wall reaches zero, and Nitsche gets up, gives me a hug, and returns to his table. I get up and watch him walk away, his jeans failing to find a grip on his bony like bum and the hem of his underpants is waving to everyone who wants to take a peek.

And that’s the thing with Nitsche.

Everything seems the same, and yet everything is so different.