Brian Rast has won one of the biggest payouts in the history of poker after outlasting a field of 43 entrants to win the $7.5m first prize at the inaugural $500,000 Super High Roller Bowl.

Brian Rast is going to have to pinch Daniel Idema’s hot air balloon to drag his latest haul away from the Aria. The creator of Zen Poker Mentoring has won $7.5m playing in one of the toughest High Roller events in recent memory. 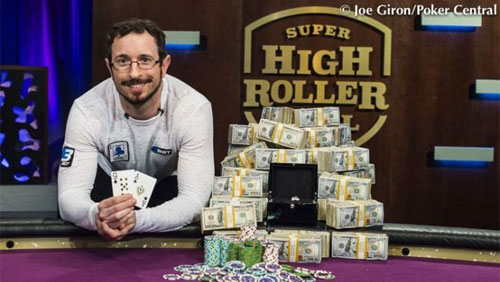 There was a time that these events were attractive to the pros because they contained so many whales. The harpoons have done their damage. You are more likely to see a flamingo in the Manchester Ship Canal, than a field full of dirty rich businessmen in a High Roller these days.

Instead, what we are left with is a bunch of outstanding poker players, all exchanging pieces of themselves, and then taking to the felt to cut each other to ribbons. On this occasion the rapier of Rast was more rambunctious than most.

The team behind the tournament was after a field of 50 entrants. Seven people let them down. Not that anyone would shed a tear over the $21.5m prizepool. It took 10-hours for Rast to beat the final seven players. Here is the blow-by-blow account of those eliminations.

The first to leave the party was Erik Seidel. Before this event only Jonathan Duhamel had won more money than Seidel in 2015. It wasn’t a surprise to see him rise to the final table of this one. His journey ending after Scott Seiver won an exciting flip 77>AQ. Seidel would flop both an ace and a queen, but Seiver would turn a seven to rip the wires out of the motherboard of the Cyborg.

Tom Marchese would exit in sixth place. Big Cheese got a little short, called off a David Peters shove holding [8h] [6h], and watched in disdain as Peters turned a king to end his hopes of further High Roller glory.

Peters was the overnight chip leader, but even with the scalp of Marchese on his belt, he couldn’t manage two nights at the summit. Peters moving all-in with [Ac] [6s], Connor Drinan calling with [Ad] [Ts], and his kicker issues didn’t resolve themselves by the time the dealer had done his business.

Connor Drinan’s excursion ended in excruciating pain in third. Fortunately, for Drinan, he has become accustomed to having the shit kicked out of him in the worst way in these big buy-in events (AA v AA in the One Drop anyone).

On this occasion Drinan got it in with pocket queens, Brian Rast wanted to party with the snowmen, and a third eight on the turn melted Drinan’s heart…. until he got to the cash desk and picked up his $3.2m

Heads-up began with Seiver holding a 2:1 chip lead. Rast pulled it back, and then some. The final hand saw them flipping for the title. Rast’s [As] [9s] flopping a nine, to beat the pocket fives of Seiver, to hand him a huge amount of cash, a championship ring, and the bragging rights.

With all of this cash floating around there was some movement in the All-Time Money List.

Rast’s fourth seven figure of his career saw him move from 54th place to 11th place; Erik Seidel moved from 5th to 3rd; Scott Seiver moved from 12th to 6th, meaning Martin Jacobson and Michael Mizrachi drop out of the Top 10.