Home / Poker / Martin Jacobson: Life After the WSOP, Philanthropy, and his Love for Animals 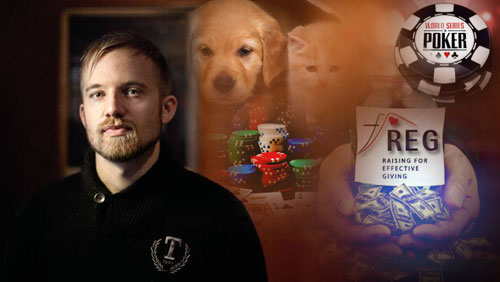 Lee Davy speaks to the World Series of Poker Main Event champion, Martin Jacobson, about life after his $10m win, philanthropy and his love for animals.

I used to refer to Martin Jacobson as the best player NEVER to win a major title. Now I get to call him the World Champion. It feels so much better.

He is arguably the greatest modern day poker player to ever win the World Series of Poker (WSOP) Main Event. He is the ultimate poker poster boy. Good looking; fit, and has that table presence handed to all the greats.

He also has a heart of gold. A young man whose needs come secondary to others, never better demonstrated than when he donated a large chunk of his WSOP winnings to Raising for Effective Giving (REG).

I caught up with him before he headed to Monte Carlo, for the European Poker Tour (EPT) Grand Final, and this is what he had to say.

What have you been up to?

“My life seems to be dominated by a house move at the moment. Otherwise, I have been traveling. I had a great time in Malta, and am going to Monte Carlo. Then there is SCOOP, and of course, the WSOP comes around again. There is a lot of poker to be played. I have been spending my time preparing, both mentally and physically.

The trailer for 10 for 10 looks good. It surprised me that such a private person would feature in a documentary.

“It wasn’t planned. When I signed the deal with my sponsor Natural Stacks they suggested sending out a film crew before the final table. It was envisaged that the footage would be used to supplement a series of interviews, but it turned out to be something much bigger.

“They followed me everywhere. Getting as much footage as possible. When I won, they realized they could turn the footage into a documentary. They have a sick amount of content. Hopefully, it will look great, once it’s been through the editing process.”

What a great way to grow your personal brand. Is that important to you?

“It’s not something I spend a lot of time thinking about. If there’s an opportunity to appear on a podcast I find interesting, or be part of an event I am interested in, then I will do it. I won’t get involved for the sake of a brand name. I don’t care for that type of stuff.”

When can people expect to see the final version?

“I’m not sure. There’s still a lot of editing to do. I haven’t seen a final version yet.”

What has the sponsorship interest been like before, during and after your win?

“There wasn’t a lot of activity. It was low key. I’ve had less offers since I won. I guess most companies saw the opportunity to be on ESPN as the main selling point.”

You are a quiet young man by nature. Has that been a problem for you considering all of the hype?

“When I won, it was overwhelming. I knew it was an important obligation to do the media work. It was harder than I expected. You get used to it. You adapt to the situation. I actually find it a lot more fun these days.

“It’s been a good learning experience, for my own personal development. It made me question why I found it uncomfortable doing interviews in the first place?”

You donated $250,000 to REG. At what point in the year did you decide to join REG, and how did it feel to donate such a significant sum of money to help others?

“I joined about a month before the final table. It felt great to give the money. I knew the win was going to change so many lives. I decided to donate towards animal charities, and it felt awesome to contribute an amount of money that would make such a difference.”

Have you always been interested in helping those less fortunate?

“I back a couple of poker players, so I guess so! Joking aside, I think it’s always been there, deep down, but it hasn’t risen to the surface until recently. I have gotten a little older, mature, and more spiritual. I am working very hard on my mindfulness and awareness, and that’s helped a lot.”

I believe your partner is a great inspiration on that count?

“Yeah she is. She is a lot more hardcore than I am, but she is a huge inspiration for me. I learn a lot from her.”

Has she helped your game?

“She helped me prepare for the final table. She doesn’t play poker, but she knows how to help me get in the right mindset. We talked a lot about the Law of Attraction and stuff like that.”

How important is the mental side of the game?

“I think it’s a balance. Mental work is important, but you also have to put in the hours and work on your technical game. Don’t hope that you will attract victories without the work. You need to work on your mental and physical state so you are fully prepared for poker.

“Everything in life plays a part. You need to make sure that you focus on all the parts of your life; make sure you don’t have any major leaks in life, in the same way as you would try and remove major leaks from your poker game.”

“My love for animals goes way back, but I wasn’t fully aware of how important it was until recently. When I read through the charities on the REG website the animal charities resonated more with me.

“There are so many things pulling the world apart at the moment. That’s what REG is all about. They aren’t concerned with just fixing the direct problems; they want to fix the causes of those problems, so we can all live in a better world. To me, an animal life is just as valuable as a human life, and it’s important that someone takes responsibility for them. I know not everyone resonates that way, but since I do, I thought it was the right place to put my money.”

I have recently read the book “The Life You Can Save’ by Peter Singer. It has totally changed by view on the world, how I spend my money, and how I can use that money to help others…I was even wondering why we aren’t all forced to pay tax to help others less fortunate than ourselves. Do you have moments like that? If, so what do you think about?

“I think about those things. It depends how mindful I am? Like everyone, I get into patterns of caring about unimportant things. Things that aren’t as important as the things you are talking about. But when I am fully myself, and have more time to think, and calm my nervous system, I definitely get into the tracts of thought that you are describing.”

Here is a glimpse at his forthcoming documentary “10 for 10”.