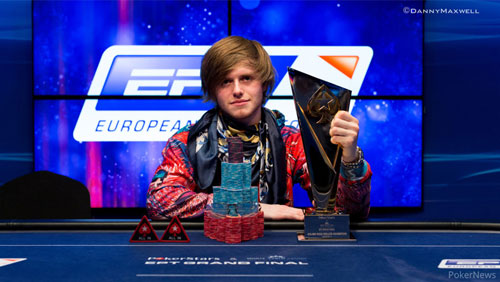 It was an impressive victory. He is an impressive young man. He was only eight years old when he learned to play Five-Card Draw on a play money online gambling site. 13-years later, and he’s walking out of Monte Carlo a millionaire.

He is just 21-years of age. EPT Grand Final Main Event winner, Adrian Mateos, is just 20-years of age. At the other end of the scale, 55-year old Erik Seidel walked out of Monte Carlo with the biggest prize of all (€2,015,000). Age really is no barrier in this great game of ours.

Carrel’s story is impressive, because he is breaking through at a time when most pundits will tell you is the toughest time to make it as a professional poker player. Yet Carrel did it the old school way. He deposited $15 in an online account and ran it up to $500,000 playing mainly online cash games.

He also likes to dabble. After winning sandbags playing online cash games, he ventured into online tournaments, and won the Sunday Million. Then he thought he would give the live tournaments a go, and walked away with the Grosvenor United Kingdom Poker Tour (GUKPT) Grand Final. Now he has beaten arguably the toughest live field he has faced, and walked away with the first seven figure score of his fledgling career. I have also been told he’s a dab hand in the live cash games.

The last time I spoke to him he was planning to go back to school to study PPE. I think he can put that on hold. He is on a heater and he has to let this thing run its course.

Carrel topped a field of 215 entrants. The final table contained Steve O’Dwyer, Max Altergott, Dario Sammartino, Jeremy Ausmus and Dan Smith. But it was Imad Derwiche who eventually stood before Carrel and the title. The young Brit had a significant chip lead. It was all over after 30-hands.

The final hand came when Derwiche moved all-in holding [6h] [2h], and Carrel called holding [Kd] [6c]. The board stayed high and Carrel was left to celebrate what is surely only the beginning of a very bright career.