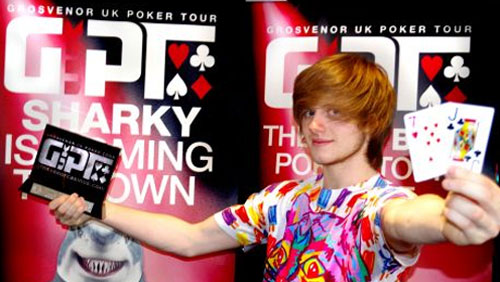 When Charlie ‘Epiphany77’ Carrel told me he was considering a trip to South Africa to take in a safari, I wondered if the World Poker Tour (WPT) would want him involved in the WPT Emperors Palace event in Joberg?

Then I had another thought.

It’s one thing running up $50 to $500,000 playing online cash games, and tournaments, but to get noticed in this business you really need to take down a noticeable live tournament. That was my advice to Epiphany77. Get involved in more live tournaments. Get some results. Get that mug splayed across poker media outlets. Get noticed.

Charlie Carrel has won the 2014 Grosvenor United Kingdom Poker Tour (GUKPT) in London. It’s one of the toughest UK fields of the year, and he defeated a stellar final table on his way to the first prize of £108,625.

He is starting to get noticed.

The 21-year old led when the penultimate day ended with 20-players, and when the numbers condensed to nine he was the only player to begin the final table with a seven figure stack count.

Carrel proved that he can joust with the best, both online and live, after navigating his way through a final table that included the likes of Will Kassouf, Priyan de Mel, Adrian Mateos, Tamer Kamel, Ben Vinson, and Paul Vas Nunes.

There were two former GUKPT champions on the final table. De Mel holds two after victories in Blackpool (2009) and Bolton (2010), and Vas Nunes took down the Reading event during the summer. The latter is also a former Unibet Open champion, and has six figure scores earned at the World Series of Poker (WSOP) and Estrellas Poker Tour. De Mel finishing in seventh after a straight v flush fatality against Ben Vinson; and Vas Nunes would reach heads-up, before finally succumbing to Carrel.

Will Kassouf was making back-to-back final tables. In 2013, Kevin Allen took all the plaudits, with Kassouf finishing in eighth. The 2014 Grand Final would see him climb three more places, before Carrel’s draw got there on the river to clip the wings off his top pair.