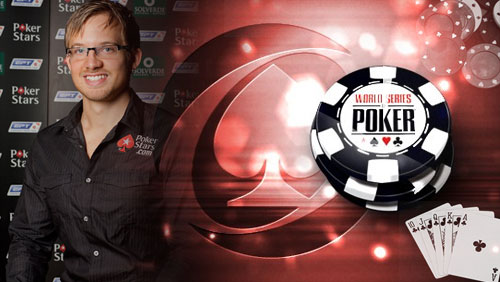 After a 118-day hiatus and one day of play that reduced the field to just three players, the 2014 WSOP Main Event has come to a close and Martin Jacobson of Sweden is its champion.

The finale began at 5:30 p.m. PST with Jorryt Van Hoof, Martin Jacobson, and Felix Stephensen taking their seats and resuming from where they’d paused early in the morning after a full day of final table play. Whoever won would become the first player from his country to win poker’s world championship, significant because all three nations have produced some world-class poker players over the years.

Van Hoof’s performance for most of the first day of this final table was, in a word, dominant. Nobody wanted to play a pot against him with the thought of losing out on a large pay jump, and he took full advantage by pressing his advantage. Late in the night he dropped from his high perch for just a bit but managed to maintain the lead, and he had just begun to get his old form back when play ended for the night.

Jacobson played with a short stack for the bulk of the first day, relying on the all-in move to keep himself afloat while looking for a chance to stack up. Once he was able to pick up chips he became the most dangerous player at the table, backing even Van Hoof away from a pot here and there. Stephensen was similarly challenged in the early going and managed to get himself into position to play on the final day of the tournament without ever breaking into the top tier of stacks.

Fans of high-level poker were in for a treat – it was all bets and raises and three-bets, as one would expect from two Scandinavians and a Dutchman. Every decision was carefully considered, every bet the result of deliberation over all the possible decisions that could be made. Even the decisions to call that resulted in lost pots were almost always the right ones to make, an excellent example of how to make the right play without focusing on the results.

All three players are so tricky and aggressive in the right spots that floating – calling with two overcards to the board without a hand to see the turn – is a pretty standard response to an opponent’s bet. That tendency led to the first key pot of Day 2, which slashed Felix Stephensen’s stack in half. After raising before the flop on the button with K-J and calling a third bet from Martin Jacobson, the flop came ten-high and Stephensen called a second bet. When he hit his king on the turn he was committed to go the rest of the way, and so he did, only to lose out on the nearly 60 million-chip pot when Jacobson turned over pocket aces. Jacobson used that boost as a springboard to a narrow chip lead after tangling twice with Van Hoof.

Van Hoof tumbled further downward not long afterward. He doubled Stephensen up after calling the Norwegian’s all-in bet on the river and showing down a lowly turned pair of fives, which lost out to a flopped pair of nines that Stephensen had originally checked. That doubled Stephensen to 48 million and dropped Van Hoof to 63.8 million, the lowest point he’d seen since early on in the first day of the final table. Then Stephensen took another 47 million chips in a pot against Van Hoof, moving ahead of him for the first time and dropping the Dutchman’s stack back to 50 million.

The final hand of the tournament for the Dutchman saw him on the button with A-5 of diamonds against Jacobson’s A-T in the small blind. He opened with a raise and Jacobson, as he’d done with increasing frequency throughout the night, made a third bet to put the pressure back on Van Hoof. Perhaps tired of being pushed around after having such a different experience the day before, his eventual decision was to move all-in for 46.2 million – and Jacobson called almost immediately, tabling his dominating cards. The board brought no help and Van Hoof’s incredible run at the final table came to an end in third place.

The lead as heads-up play began was 142 million to 58.5 million for Jacobson, who had played a short stack optimally the previous day before riding a rush to second place at the end of play. The two had clashed repeatedly in the latter stages of the previous evening’s play, when both were hanging on to make it to the finale, but this time around Jacobson had the initiative and Felix Stephensen was battling straight uphill.

The Norwegian’s stack was steadily ground down over the course of the 34-hand duel as Jacobson shifted into high gear with the world championship on the line. When he picked up pocket pairs, he couldn’t get action, and he also ran into spots where he would hit a pair only to have Jacobson show down the same pair with a better kicker. Finally he opened with A-9 of hearts on the button for 3.5 million and found himself facing an all-in bet by Jacobson. Stephensen made the call and was behind the Swede’s pocket tens, even before the flop brought another ten for the set. That held up and brought the tournament to a close, giving poker its first Scandinavian world champion.

– Unlike in some recent years’ final tables, there were relatively few four-bets at this one, at least until the final stages. The trend of hyper-aggression that ruled for a while seems to have given way to more bet-and-call poker, at least from this small sample.

– Some people are going to call Van Hoof’s loss a huge meltdown, unfairly in my opinion. First of all, his monster stack during five-handed play (half the chips in play) was by no means a guarantee that he would go on to victory. Then there’s the break in his momentum forced by the overnight break, which couldn’t have helped – especially since his opponents had the chance to have their friends help them analyze his first-day play and adjust accordingly for the finale. He told Kara Scott in his interview that he missed just a few spots to make a bet today, and at the level these three players were playing, that was enough to doom him.

– Jacobson was the chip leader on multiple days throughout the tournament before reaching the final table and having to shift down into survival mode. He moved all-in more than a dozen times on the first day, only being called a handful of times and finding himself in good spots when he was. Once he picked up chips to work with, he shifted into an all-new gear and gave himself a chance to make a final push to the championship on the last day of play. Many of poker’s biggest names are already calling it one of the most masterful performances in Main Event final table history, and it’s hard to argue with them.

– Felix Stephensen’s performance was almost as impressive as Jacobson’s. The main difference is that he didn’t find himself with the better cards quite as often. He didn’t make mistakes often at all, and while he’s likely to suffer the same memory gap fate as other runners-up, he fully earned his $5.1 million prize.

– The nearly-live broadcast is great for anyone who loves poker enough to understand the more technical aspects of the game. On the flip side, it makes the game much less accessible for the uninitiated.

– But that cash on the table during heads-up play hasn’t lost its flash. It’s one of the most iconic traditions in poker for a reason. $10 million in cash will make anybody flipping through the channels stop for at least a moment.

– Van Hoof played the entire first day with no hat, no hoodie, no sunglasses – nothing to protect himself from his opponents’ prying eyes. After a short while in today’s action, he put on a pair of sunglasses – but he never managed to regain that confident stature he’d carried the entire day before

– This was the third-longest final table of the November Nine era, at 328 hands, a testament to the deliberate nature of play throughout it. Winning the Main Event is truly as much a physical endurance contest as it is a test of poker skill.