Home / Poker / From nothing to US Poker Open glory: Stephen Chidwick takes it down 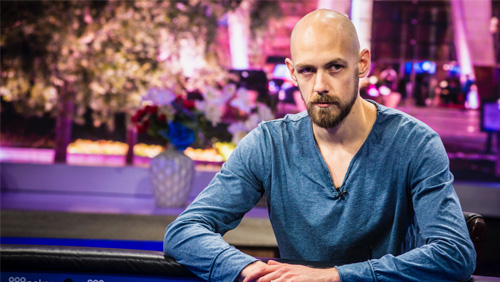 The Global Poker Index #1 ranked British player, Stephen Chidwick, has taken down the inaugural US Poker Open after making five final tables and winning two of them in the eight-event series.

It’s 2006, and a man with the nickname of Jesus is enthralling poker fans by turning $0 into $10,000. It was at a time when online poker rooms were heavily promoting the dream of becoming a professional poker player.

Resistance manifests in many forms, but one of the most common is a lack of money.

I can’t afford it.

And then the man in black came along and gave the kids a reason to stick two fingers into the face of limited thinking. The realisation that you could turn nothing into ten large was as violent as an unexpected clash of cymbals.

But Jesus is old hat.

There is a new man in town, one that doesn’t wear black and is only at the beginning of his bloom.

Being born in a town called Deal, his parents should have known Stephen Chidwick would find a future in a deck of cards.

Chidwick began playing online poker via freerolls. Ten years later, without ever having to invest a single penny into his poker bankroll, he has earned close to $11.3m. If you remove the $10m Sam Trickett won in the 2012 One Drop, Chidwick would be the winningest live multi-table tournament (MTT) player in British poker history.

As you would expect from a high rolling genius like Chidwick, winning the most money is the metric that matters most, but he also harbours a passion for climbing the ranks, something he vividly remembers from his early days as an online grinder.

So, although, he remained focused on amassing more green than a vegan eatery, there was always a desire to bag a significant title or twelve, particularly when those closest to him are telling all and sundry that he is one of the best players in the world.

Chidwick has that significant trophy.

The UK-pro has won the inaugural US Poker Open, cashing in five of the eight events, finishing in the top three spots in four of those and winning two.

Of course, money comes with the glory in these high stakes poker games. Chidwick cashed for $1,256,650, making it one of his most celebrated and memorable experiences of the past decade.

I last interviewed him in 2014, as he prepared to appear in the £60k buy-in World Poker Tour (WPT) Alpha8. Back then, he had earned $2.8m and talked about the role that faith plays in poker. Faith in his ability and the faith that his peers and investors have in him so he can compete in the biggest buy-in games in the world. That faith keeps on growing in spades, hearts, diamonds and clubs, and it transmutes to people like me, who witness how hard work and dedication manifests in life.

Here is a brief rundown of the closing US Poker Open action.

The fifth event of the US Poker Open attracted 67 entrants, and Ben Tollerene ended up on top.

The online cash game genius doesn’t play many live MTTs, but when he does, he kills them. Tollerene has made the final table of 16 live MTTs since the start of 2017 finishing in the top three spots 62.5% of the time. There are four wins amongst that haul, and this victory is his second of 2018 after beating 117 entrants to win the $163,944 first prize in a $5,000 NLHE event at the World Poker Tour (WPT) Lucky Hearts Poker Open.

Benjamin Pollak Keeps up The Heat With Event #6 Win

What a difference a $3.5m bankroll boost creates.

Since finishing third in the World Series of Poker (WSOP) Main Event, Benjamin Pollak has appeared in nine final tables, including three at the US Poker Open.

The Frenchman’s persistence turned into triumph in Event #6: $25k NLHE besting a field of 49 entrants to win the $416,500 first prize. Daniel Negreanu and Isaac Haxton were amongst the final tablists once again, but it was the name of Chidwick that was the most prominent, as his third-place finish added a few more numbers to his ever-growing lead at the top of the charts.

The 2016 GPI Player of the Year Still Has It

The penultimate event of the festival saw the 2016 Global Poker Index (GPI) Player of the Year (POY) winner stack four $100k bricks in his rucksack. It’s not often that a win of this magnitude becomes the side news, but it happened in this one. Peters defeated Chidwick in heads-up action, ensuring the man from the UK would win the US Poker Open title with one event remaining.

It was an exceptional series for Keith Tilston.

Tilston came into the series on the back of a World Poker Tour (WPT) High Roller victory at the Bellagio where he beat 53 of the very best to capture the $424,000 first prize.

At that event, Tilston defeated Jake Schindler in heads-up action, and the pair met again, with the same outcome, in the final stage of the $50,000 Main Event.

The final event of the 2018 US Poker Open attracted 33 entrants, and Tilston earned $660,000 for the win. Tilston cashed in four of the eight games, making three final tables, and finished second to Chidwick in the overall standings.