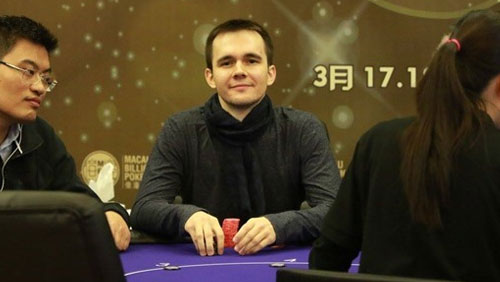 It’s Day 6 of Lee Davy’s reports from the Triton Poker Series in Montenegro, this time focusing on the winner of the HKD 1,000,000 Main Event, and a roundup from the €1m buy-in Cash Game.

The Asian crowd sitting across from me let out a collective hangover giggle. It sounds like a cacophony of monkeys at the moment a leopard strides into town looking for a headstone so he can piss on the dead.

One of them has the words ‘I Fought The Law’ on the back of his t-shirt. We all know the law won. It makes me wonder if poker players ‘fight’ other poker players, or whether the primary battle is with poker itself?

A few No-Limit Hold’em specialists came to Montenegro to pick up more video game points in the four tournaments on display in the shop window. But let’s not kid ourselves here. These events are the entrée. The cash games are the main course.

Tom Dwan, Phil Ivey, Daniel ‘Jungleman’ Cates – they win millions in these games because they approach them as a never-ending game. Some days you lose; some days you win. But you can’t sit there counting pennies. You need to look ahead until the day the headstone has your name on it, and then take a final count before the leopard cocks his leg.

So how do you ever leave a never-ending game?

This week, I have stared the beasts in the eye, and none of them has come up with a decent answer. There are no goals. There are no plans. There is only this moment. Only this hand.

I don’t know what Mikita Badziouski calls himself: cash game player, tournament player, both, but he’s been mixing it up, both sides of the divide this week. And the man with the little handbag is in fine fettle.

After the rush of the HKD 250,000 Short-Deck event, the HKD 1m Main Event felt positively pedestrian, even with a 30-second shot clock. The event attracted 63 entrants, with at least a third of those entrants coming via a second, third or even more bullets.

Steffen Sontheimer entered the final table with the chip lead. The defending champion, Manig Loeser, wasn’t that far behind. But it wouldn’t be the Germans tournament. Heck, it wasn’t the Germans festival. Dietrich Fast bowed out in ninth, Loeser in eighth and Sontheimer in fifth.

The final two opponents were Badziouski and the cash game specialist Rui Cao with the Belarusian taking the title and $2.5m in prize money. It is Badziouski’s most significant win to date beating his previous seven-figure score earned when he finished third in the 2017 World Series of Poker Europe (WSOPE) One Drop High Roller.

If you have a vision of a professional poker player settling down for a breakfast smoothie, followed by deep meditation, a massage, and an hour listening to Max Richter, before sitting down to play for the €2.5m first prize, then you’re not Rui Cao.

After making the final table, Cao immediately jumped into the €1m buy-in cash game streamed live via Twitch. For once, his fellow players understood he had to leave early. Cao banked a €241,000 profit.

But Cao wasn’t the biggest winner in a night that saw the two largest No-Limit Hold’em cash game pots ever recorded on a live stream. That honour goes to Kane Kalas.

Kalas has spent the entire week commentating on these players, giving him the advantage of seeing all of their hole cards. But when you flop a set on the turn in a €1.8m pot, none of that matters much.

Kalas tangled with Jason Koon in only his fifth hand at the table. It was a four-bet pot with Kalas the aggressor holding pocket tens and Koon calling with AQo. The pot was €263,000 deep before Koon fired another €160,000 at the sight of the Tc turn, and Kalas was more than happy to oblige. The river was the Ad, Koon pulled the trigger, shooting half a million euros into Kane, and the lad quietly said, “Call.”

When we arrived in Montenegro, the men manning the passport control booths looked liked giants with hands like shovels, and at that moment, Koon must have felt them squeezing tightly around his neck.

In the same orbit, Koon flopped a straight flush draw in a threeway hand that saw Tom Dwan hit top pair, and Elton Tsang hit the bottom pair. The action got a little heavy on the flop with Koon check-raising to €100,000 on the Ad8h7h flop. The action forced Dwan to ditch his ATo, but Tsang continued somewhat speculatively with K7dd. The turn brought the Qd out of the deck. Tsang bet €390,000 on his nut flush draw, and Koon called, swelling the pot to €1.5m.

The €1m cash game is scheduled to reappear over the weekend where players will continue to fight the game hoping that the game doesn’t win.