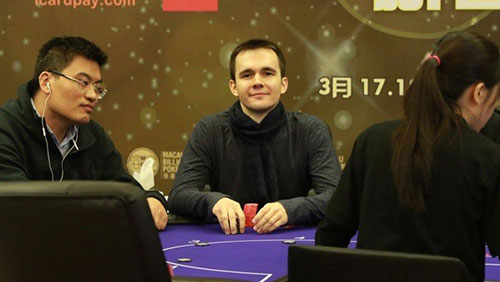 Rounding up the 28th season of the PokerStars Macau Poker Cup, the HK$80,000 High Roller tournament has found a winner.

Mikita “fish2013” Badziakouski took first place and stuffed just over $297,000 into his wallet. He also picked up a $30,000 Platinum Pass which gives him entry into next January’s PokerStars Players Championship.

Hailing from Belarus, the high-stakes player had already won over $6 million prior to taking a seat for the Macau Poker Cup. With the latest winnings, he has now earned over $6.6 million and is ranked 42nd on the Global Poker Index. He has cashed in live tournaments every year since 2010, with the exception of 2014. He collected the most money last year, winning just under $4.6 million in tournaments across the globe.

The final table of the tournament saw nine players from nine countries vying for the top prize. In the end, though Badziakouski eliminated Raul Gallego Martinez from Spain to take it down. Martinez, who has been playing professionally for several years, has had sporadic wins, but this was the largest to date. He took home $1.57 million as the second-place finisher.

The Macau Poker Cup lasted for 17 days and offered 31 different tournaments. The main attraction was its Red Dragon Main Event with a prize pool of HK$10,000,000 (US$1.27 million) which was won by Alvan Zheng. 1,122 players entered the event, but the Macau native proved to be on top of his game and was awarded $390,000 for his victory. Zheng was also awarded a PokerStars Players No Limit Hold’em Championship Platinum Pass worth an additional US$30,000, which allows him to compete in a tournament in the Bahamas next year. Canada’s Elliot Smith finished third for just over $1 million and Raghav Bansai from India came in fourth, taking home $845,000.

Promoted by PokerStars, the Macau Poker Cup took place at ‘PokerStars LIVE at the City of Dreams’, a branded venue at Melco Resorts and Entertainment’s City of Dreams casino resort in Macau.