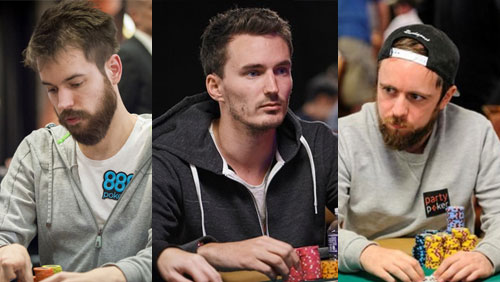 Organisers of the Super High Roller Bowl have added another 15-players into the mix, and the American-centric selections mean the terrific trio of Dominik Nitsche, Steffen Sontheimer and Patrick Leonard miss out.

I’ve been told by the people who compete in such things that the Super High Roller Bowl (SHRB) is the Superbowl of High Stakes Poker. The organisers pitch the buy-in perfectly, the structure is dynamic, and the hosts look after you in the same way Rambo cared for his Bowie knife.

So why the ridiculous lottery?

Honestly, the system for selecting 49-players is utterly bizarre. It feels like an intern walked into Poker Central Towers and said, “Hey, give me something to do, I don’t want to make cups of tea,” and someone gave him the job of deciding the fate of 50+ high stakes poker players.

The SHRB isn’t an online training course on how to improve your excel spreadsheet skills. The gimmick of ‘scarcity’ isn’t needed, folks. Take a look at your numbers for the shift the lads put in at the Super High Roller Bowl China. It rocked, man. Take the lid off, and let the steam rise.

Back in March, PokerGO held a live lottery for subscribers to select the first 30 players.

That left 18 places left for the organisers to hand select.

We know that one place will go to the winner of a $10,000 live satellite that takes place at the ARIA on May 26 if the game attracts 30-entrants. If not, then the ARIA will award cash prizes.

Last year, the ARIA and Poker Central managed to persuade Kevin Hart to play. I wonder if there will be another big announcement of that ilk before kick off?

My first thought, when I saw the hand-picked list was how American-centric it was. I am not aware of the behind the scenes wrangling here. I know that the three people I am about to mention might have turned seats down. But here it goes.

I can’t see why the Poker Central team hasn’t selected Steffen Sontheimer. The German star showed his allegiance by travelling to China to compete, and he won the inaugural Poker Masters, a made for PokerGO show.

Another German that I would have liked to have seen compete is Dominik Nitsche. His rise through the ranks from a teenage online sensation to high stakes MTT player is more than story worthy. Not to mention he is the reigning World Series of Poker Europe (WSOPE) One Drop High Roller winner, and is in shit-hot form finishing fourth in China, eighth in the Asia-Pacific Poker Tour (APPT) High Roller, and fourth in the partypoker MILLIONS Grand Final. Also, his employer 888Poker is sponsoring the bloody event.

And lastly, I would have given Patrick Leonard a seat. Not only is Leonard another player who boasts an impressive narrative (former poker writer turned one of the best online MTT players in the world), but he has an Emmy award-winning TV crew following his every move. If I were on board the SHRB team, I would want to get as much free advertising as I could get.

The $300k rake-free event will play out at the new multisports live arena at the ARIA on May 27. You can watch the whole thing on PokerGO (if you have a subscription).

Here are the payouts: