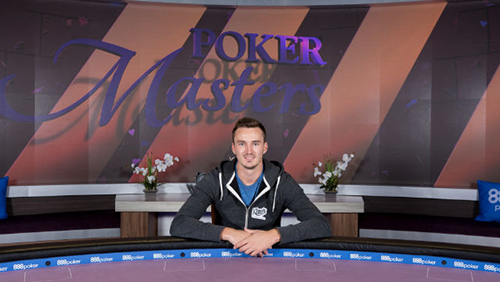 It’s safe to say that Steffen Sontheimer is in his breakout year.

His brilliance is known to those closest to him, and now, thanks to his victory at the Poker Masters, so does the rest of the poker community.

By the time he had finished poker players were missing limbs, nursing bandaged heads, it was utter carnage, like the young man was airborne in an old Fokker barreling the shit out of everyone beneath him.

And he was on top.

There is no doubt about that.

And yet despite his consistent and dominating performance, the math was such that anybody who won the final event of the series could have walked away as the champion.

It’s good for poker, and the future of the Poker Masters that Sontheimer didn’t allow that to happen. It would have been as anti-climactic as silk stockings without the high heels.

The final event attracted 36 entrants, and the Germans swarmed the final table like ground troops belonging to the World #1 Risk player with four of the final six coming from that neck of the woods.

Stefan Schillhabel fell in sixth, Justin Bonomo in fifth, and Seth Davies hit the rail in fourth. That left Sontheimer, Christian Christner, and Fedor Holz to battle it out for the $100k title, with only Holz able to catch Sontheimer and claim the Purple Jacket.

But Holz won’t need to add another coat hanger to his Ikea Pax. Christner eliminated the young genius in a flip that sent Christner into a heads-up confrontation with Sontheimer, and a slight chip lead in tow.

Sontheimer came from behind to take it.

But he was humble in defeat, claiming that Sontheimer was the better heads-up player who, “Took it down like a true champion.”

Outside of his excellent Poker Masters performances he recently won the Poker EM High Roller in Austria for $501,183, finished sixth in the €100k High Roller at the PokerStars Championship in Monte Carlo for $415,348, and finished second in a $100k Aria High Roller for $1.2m.

Who defeated him on that day? 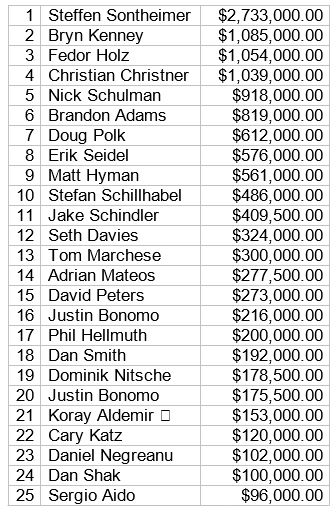