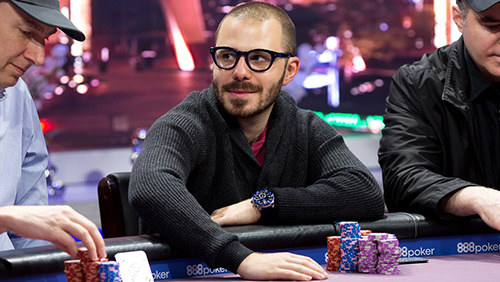 Dan Smith and the Daily Fantasy Sports duo Tom and Martin Crowley have come together to create a $1m charity matching drive with proceeds going to effective charities.

We can sit here watching re-runs of Salem’s Lot while we pick our arse, the little kid floating outside the window, tapping, “let me in.” We can eat ourselves to death. We can bathe in the fluorescent lights of the shopping mall buying shit that we don’t need.

We can do that.

Or we can do something else.

The last time I felt the pulse of humanity, it told me that money created happiness. Yes, you bang your hea

d on a certain ceiling, and your happiness levels plateau, but a lot of us have a long way to go before a strand of silver hair touches the roof.

But there is another way of using money to create happiness.

We can give it away.

Last year, Dan Smith decided to test this hypothesis. He paired up with Raising for Effective Giving (REG) and broadcast his intention to raise $375,000 for effective charities, by matching donations up to a max $175,000.

“It’s clearly the best thing I have ever done,” Smith tells me over the blower. “I have hope that some of the people I encouraged to get involved, stay involved, do drives of their own, or do things they previously hadn’t thought possible.”

And just in case none of that happened, Smith is back, and this time he’s getting a little help from Daily Fantasy Sports (DFS) stars Martin & Tom Crowley. It was the Crowley brothers who turned Smith’s last challenge into the juggernaut it became by donating over a million dollars between them. This time the trio is going to match donations up to a ceiling of $1m between now and the end of the year.

I managed to catch up with Smith to ask him a few questions, and this is what he had to say.

Why are you doing this?

“A few years ago, I was struggling with some self-esteem issues,” says Smith. “Then through some work, I could see that I had become one of the best poker players in the world. When you think about how many people are playing poker, and how big the world is, it’s a special achievement. That recognition made me feel like I could do some good things outside of poker.”

Why are you the person to be doing this?

“It’s always going to seem strange for someone to be the person who makes a difference,” says Smith. “But someone has to be that outlier. I decided to give it ago, and see if it would work. I wanted to know if I had the potential to do something great.”

“Some causes are better than other causes. Since big numbers are being thrown around, choosing the right cause makes a substantial difference.”

How does helping others make you feel?

“It makes me feel great. People underestimate the purely selfish reasons to do good.”

When you look at the world, what do you see?

“Years ago, I wasn’t a very positive person,” says Smith. “One of my dear friends, Andrew Lichtenberger is an outrageously positive person. I set out to think a lot more like him. I have come a long way in that regard and see a lot more of the good in things. There is a lot to be upset about in current times. However, on a deep level, I think everything is going to work out for the best.”

What are your longer-term goals when it comes to serving others?

“I’m unsure. Things could change very quickly – year to year. Especially if I reach a point where I want to play less poker. I would like to open my own non-profit, but I have a long way to go before that dream is a reality. In the interim, I think actions like this will save thousands of lives, and I’m hoping that do it publicly rather than privately encourage peoples to get involved.

“There are more and more people making more or less infinite wealth in cryptocurrencies. I think there are very diminishing returns on wealth. Eventually, at a certain point money doesn’t become a limiting factor for things you might want to do. In terms of personal satisfaction and what’s best for the world, you can make some good choices specifically hoping that people with a lot of means donate to charity.”

If you want to join donate and have your amount matched by Dan and the Crowley Brothers, then follow this link.

Becky’s Affiliated: A year in review- how the gaming industry is making a difference
Becky Liggero Fontana
7 December 2017
.