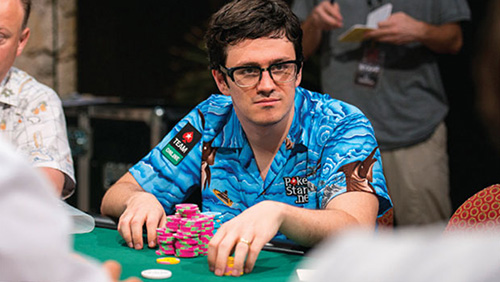 Former PokerStars Team Pro, Isaac Haxton, partners with partypoker, a company he predicts could overtake PokerStars as the world #1 by the end of 2019.

As a trio of PokerStars Team Pros melt away like a rogue snowflake stuck to your bathroom window as the shower shoots away in the warmth, a former member of the team has taken up employment with the competition.

Really pumped to be joining this team. Party are doing great things. https://t.co/Wfd54FBhca

Talking about the signing, partypoker MD, Tom Waters, referred to Haxton’s commitment to principles as one of the primary reasons he was happy to welcome him on board. One wonders if in mentioning those principles Waters is referring to the way Haxton left his former employer?

Haxton joined PokerStars in 2012. He left four years later in protest against the way they put a gun to the temple of the Supernova & Supernova Elite programs and pulled the trigger.

I have resigned from PokerStars in protest of the changes to the Supernova and Supernova Elite programs: https://t.co/I7c49fB00D

He wrote out a well thought out post on 2+2 explaining his reasoning, “I cannot in good conscience continue to endorse a poker site that treats its players this way.” And after that never missed an opportunity to take a swipe at his fellow employer from the safety of social media platforms.

And you have to respect a man who is unafraid of using the word cunt.

Give these cunts another year and they’ll probably be debiting arbitrary “maintenance fees” from your balance.

The Stable Grows Ever Larger

By my calculations partypoker now has 18 poker players/sports stars representing the brand in an ambassadorial capacity. Mike Sexton and John Duthie will get involved now and then, so that’s 20. Then you have Fedor Holz, Jason Koon, and now Isaac Haxton acting in a partnership role, so that’s 23 (Coincidentally, PokerStars also has 23).

Haxton, from Syracuse New York, is the third American to join the party behind Mike Sexton and Jason Koon. Nice, if party was operating an online poker room in the States, but they’re not.

The main draw in signing Haxton is his involvement in the High Stakes games and the respect he draws from the poker community at large. Being anti-PokerStars also helps things run that little bit smoother.

And Haxton has been in decent form of late. He may have only won one live event in 2017, but he always seems to make the final table of these things. I’m sure if someone pushed his swing that little bit harder then he would be packing some trophies in his suitcase. Haxton made two final tables at the PokerStars Caribbean Adventure (PCA) finishing sixth in the $100k and eighth in one of the $25k events. All told, he earned $2.8m playing live events in 2017 his best haul since 2014, so he begins life with party in fine fettle.

“I am very excited to be joining the partypoker team,” said Haxton. “I’ve been very impressed with their growth over the last year or so.  From expanding their online cash game and tournament offerings, to improving their software, and most of all rolling out their ambitious and innovative live events program, their commitment to growing the game and providing a great product for their players has been clear.  I’m truly proud to represent the company, which I believe is going to be the future of poker, online and live.”

Writing on his Twitter account in August 2017, Haxton made a prediction that party could overtake PokerStars as the #1 by the end of 2019. I imagine that would make him a very happy camper indeed, and what better way to make sure that happens than from within the control room of their primary competitor.