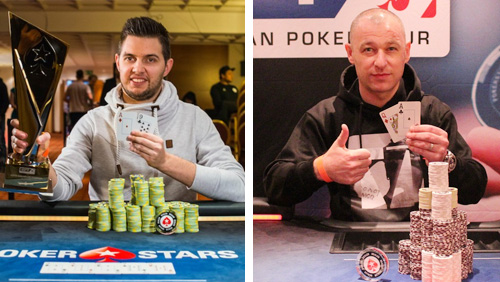 Two results from the PokerStars’ European Poker Tour in Prague where Matthias Eibinger wins his second €50k in a matter of a few months and Boris Mondrus takes down a busy looking National.

I have the shape of a spoon handle seared into my right hand. Nick Cave would call it a red right hand. And it was at the time. I was steaming broccoli. The spoon sat on the hot plate that separated the burners. I had no idea it was hot. I picked the thing up, and we became one.

My mother-in-law saved the day, waltzing into the backyard to sever a limb from an aloe vera plant. She put my finger inside, covered it with kitchen roll, tied it with a blue elastic band, and several hours later I had an impressive looking scar, minus any anguish.

Even that spoon, as hot as it was, did not have the heat that Matthias Eibinger generates right now, and the way it’s going, people are going to have to smother their bodies with aloe vera just to sit down and play with him.

The man currently occupying the #2 spot on the Austrian All-Time Live Tournament Money Earner list conquered a field of 40-entrants (30 unique, ten re-entries) in a €50,000 buy-in event that pulled in €1,920,600 during the opening salvos of PokerStars’ European Poker Tour (EPT) in Prague. It was a turnout that trumped the 34-entrants that came out to play in last year’s event where Timothy Adams locked up the €555,000 first prize.

As you would expect, the final table contained more jelly beans than butter beans.

If you thought those stats were rock n roll then how about Pavel Plesuv who came into this one on the back of his triumph in the World Poker Tour (WPT) Seminole Hard Rock Rock ‘N’ Roll Poker Open where he won $504,820 and has earned $2.8m this year.

Oh, and there was a rare appearance for Charlie Carrel, who these days spends his time giving back to the poker community by streaming low-stakes action while talking about manicures, mushrooms and melanomas, and for the second year running a Greenwood made the final table, this time Luc, last time, Sam.

When all was said and done the final fight was between Eibinger and Nemeth with the Hungarian enjoying a 2:1 chip advantage after sending Liang Xu to the rail.

An early bluff gone wrong saw Nemeth extend his lead to 8.6m v 1.4m, and it looked for all the world that Nemeth would close this one down until Eibinger began doubling up.

“Three times an Austrian,” as Lionel used to sing.

Nemeth knuckled down and extended his lead once more. Eibinger pulled him back by the hair after another double up, and never let go. The final hand saw Eibinger get lucky when his A9 beat the AT of Nemeth, but you need a little luck in this game, something I am sure Nemeth won’t begrudge.

The victory was Eibinger’s third of the year, and he has now won $4,898,716 playing live tournaments.

Check this out for a leap in standards.

When it comes to poker, Israel is on fire.

The nation of 8.7m people earned three gold bracelets during the recent World Series of Poker Europe (WSOPE), and now they have an EPT title to add to the list.

Boris Mondrus battered a field of 2,486 entrants to win the €382,750 first prize in the €1,100 EPT National, not bad for a man who only plays a few tournaments every year preferring Pot-Limit Omaha (PLO) cash games.

It’s was a hell of a field, beating the 2,117-entrant monster that turned up last year, when Georgios Vrakas collected €338,000, and it stands up pretty well against the two other 2018 EPT National attendances.

Ondrej Lon beat 3,420-entrants to win the €84,686 first prize in the €240 partypoker Grand Prix in Rozvadov earlier this year. Danilo Velasevic finished 21/534 in the World Series of Poker Europe (WSOPE) Main Event and made the final table of the Master Classics of Poker in Amsterdam finishing seventh. And Walter Treccarichi is a former Italian Poker Tour (IPT) Main Event and EPT €2k Side Event winner.

Mondrus didn’t care much for reputations, eliminating all but one member of the final table, including the dangerous Lon in heads-up action.

Attached to the win like a long dangly earring is a $30,000 Platinum Pass for the PokerStars’ Player’s No-Limit Hold’em Championship (PSPC) in the Bahamas, something that Mondrus wasn’t even aware of until he sat down to play the final.

Mondrus began with a monster heads-up chip lead (62.8m v 11.75m) after his pocket sixes beat the treys of Ali Al Saidy. Lon doubled A7o v 33, flopping a seven to close the gap – 55.4m v 19.4m, but Mondrus won the all-important flip when AQ beat 88 after an ace fell on the flop and a queen did likewise on the river.