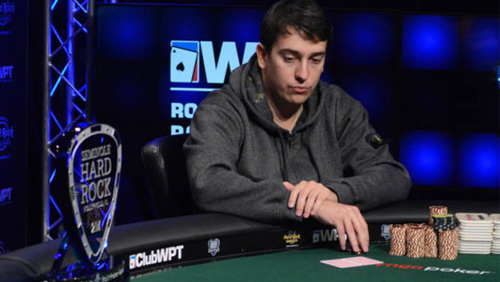 We look at the corn in our shit and think ‘what is it about these little yellow fellas that allow them to dodge the lava-like environment of our gut.’

We should display more gratitude for the corn in our excrement.

At least we have corn.

Moldova is the most impoverished country in Europe; corn is like gold.

So it must feel a little odd for a Moldovan to learn that one of their own is winning enough money playing poker to buy all the corn in Iowa.

Pavel Plesuv is a Moldovan on a mission.

The tournament attracted 898-entrants, beating the $2m guarantee by more than $800k, and Plesuv not only started the final table with all the chips, but he also carried the most heat, and Ravi Raghavan apart, the most experience.

Reading through the lines of the WPT blog, Plesuv breezed through the final table to record his fourth career win and second of the year. The Moldovan has now won more than $4m in live tournament earnings, is the Moldovan #1 All-Time Live Tournament Money Earner, the Global Poker Index (GPI) #1 in Moldova and is on course to win his third successive GPI Player of the Year award.

His 2018 acts of valiance include finishing runner-up to Thomas Mühlöcker in the Bellagio Cup XIV for $342,833, a win at the Mid-States Poker Series (MSPT) DeepStack Poker Championship Series at the Venetian, beating 1,096-entrants to bank the $640,062 first prize, and finishing second to Viktor Blom at the partypoker MILLIONS Germany for $924,841.

Three other stars of the game to go deeper than a caterpillar in an apple were Joe Serock (30th), Jonathan Jaffe (34th) and Joe McKeehen (37th).

The World Poker Tour Returns to the Commerce

The WPT has added a familiar face to the Season XVII schedule.

The $10,000 WPT LA Poker Classic takes place at the Commerce Casino, California March 2 – 5. The only piece of breaking news is that the event stops once they reach a final table of six, and the action moves to the HyperX Esports Arena at Luxor Hotel & Casino in Las Vegas. The dates for the final battle are under wraps for now.

More events are in the pipeline.