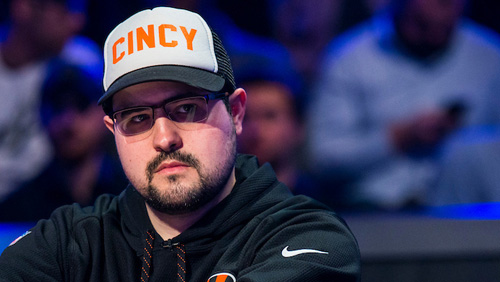 Dennis Blieden prevented Toby Lewis from winning his second major title in less than a month after a dominant display at the final table of the World Poker Tour LA Poker Classic Main Event.

It’s the 48th Annual World Series of Poker (WSOP). Live tournament rookie Dennis Blieden is having a blinder in the $5,000 No-Limit Hold’em side event. His road ends in 13th place, but he liked the dead feeling in his right foot from pressing hard on the pedal. And, the winner of that event? The UK’s Chris Brammer.

Eight months later and Blieden entered the final table second in chips in the World Poker Tour (WPT) LA Poker Classic (LAPC), and once again an Englishman was sitting in pole position. Toby Lewis. Only this time, things would turn out a little different.

It was an LAPC to remember.

Anthony Zinno came close to winning his fourth Main Event title when he finished in eighth place, and the Raw Deal host, Phil Hellmuth, caused a bit of a stir with a 15th place finish after selling 60% of his action on YouStake and buying directly into Day 2.

But all eyes were on Lewis as the final six powered into needle on red stage. In January, the lad from Solent emerged from Melbourne as the Aussie Millions champion, and he was in prime position to add a WPT title to that honour less than a month later.

The event attracted 493 entrants, and Blieden was one of the most inexperienced live tournament artistes amongst them. But he was in such form you could stick him on a train heading in the wrong direction, and it wouldn’t phase him.

The final table lasted less than five hours (79 hands), and Blieden took the chip lead from Lewis after eliminating Manuel Martinez and Peter Hengsakul and winning all but the very first big hand between him and Lewis.

The Englishman came back into contention after eliminating Marc Macdonnell in fourth. But Blieden began raising blind from the button such was his confidence and chip lead when three-handed.

Blieden would eventually eliminate Derek Wolters in third to take an 11.8m v 2.9m chip lead into the heads-up phase against Lewis. The lad from the UK is good, but he’s not that good. Three hands later, the action ended with Blieden picking up two pairs holding AQ on 663Q. Lewis jamming the turn holding pocket tens.

The victory means Blieden joins the WPT Champions Club and secures a seat in the $15,000 Tournament of Champions. Lewis, who will be bitterly disappointed to not win the title, left LA after banking more than $1.8m in a month.