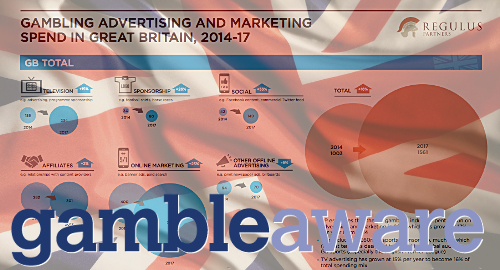 UK gambling companies are spending significantly more on online marketing than on television ads, despite the current mantra that the public airwaves are stuffed to the gills with betting come-ons.

This weekend, the UK’s GambleAware charity released financial analysis by Regulus Partners that showed gambling companies’ total marketing spending hit £1.5b in 2017, a 56% rise over what they spent in 2014.

Four-fifths of this spending is conducted online, including £747m in direct online marketing costs. Affiliate spending added a further £301m, while social media marketing tripled over the past three years to £149m. Sponsorship of sports teams doubled over the same span to £60m.

Television advertising spending hit £234m, only 15% of the total, a much smaller figure than the UK media’s near-constant deluge of anti-gambling op-eds would have you believe. Members of the Remote Gambling Association met last week to discuss new self-imposed limits on television advertising, but it appears that no matter what they decide, they will likely be fighting this war on another front soon enough.

The UK’s lottery industry was responsible for £88m of marketing expenditure in 2017, down £3m from 2014. However, television accounted for half of all lottery marketing, a significantly higher percentage than online sportsbooks or casino sites.

Of all the individual marketing channels, online gambling operators’ use of affiliates showed the slowest growth rate, rising only 2% from 2014. Last year saw many big UK gambling names reduce their affiliate exposure, in part due to an increased regulatory focus on third-party marketing partner excesses.

Regulus crunched its data using publicly traded operators’ financial reports and available data from private and internationally licensed online firms, and the company acknowledges that its numbers may not be definitive.

Regardless, GambleAware CEO Marc Etches said the report “shows that much more attention needs to be paid to the extent of gambling-related marketing online, and that internet companies and social media platforms must share in the responsibility to protect children.”

The report follows last week’s release of the UK Gambling Commission’s latest insights into youth gambling, which showed a mild rise in the number of youths who spent their own money on a gambling activity last year. However, the UKGC noted that this figure remained “low by historical standards” and the 2017 report included 16-year-olds for the first time, which helped skew the number higher.

(For a larger version of this infographic, click here.) 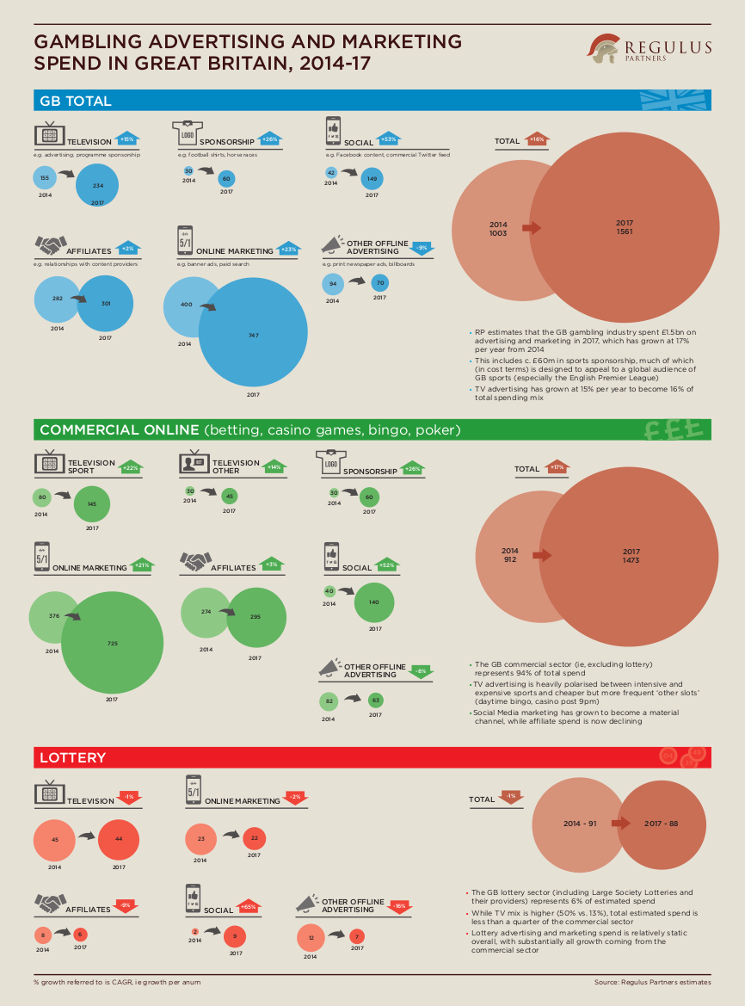