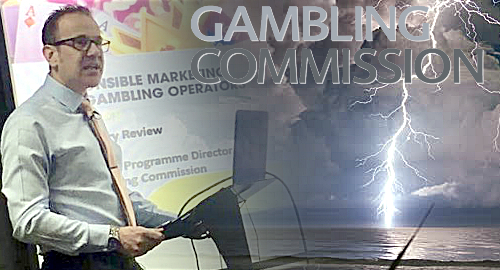 UK gambling operators are facing a regulatory ‘storm’ due to ‘hardening’ public and political attitudes toward gambling advertising, according to a UK Gambling Commission (UKGC) exec.

On Wednesday, the UKGC’s program director for consumer protection & empowerment Ian Angus gave a speech at the Responsible Marketing for Gambling Operators conference in London, telling industry execs that their future looks grim unless they adopt new practices for promoting their products.

Angus (pictured) warned the industry that it would be “unwise” to ignore the “hardening public and political mood” around gambling advertising. Angus said the current situation wasn’t sustainable, given the near-weekly negative mentions the industry receives in parliament and the near-daily drubbing the industry takes at the hands of the reliably alarmist media outlets.

Angus warned that “consumer trust in gambling is at an all-time low,” and the UKGC’s quarterly online survey tracker data showed nearly two-thirds of respondents felt gambling adverts “should be discouraged.”

Last October, the UK government opted against further advertising restrictions, arguing that there was little evidence that gambling promos led to increased problem gambling activity. But the volume of betting ads during this summer’s World Cup led to another flood of consumer complaints, and the government needs to do something to take peoples’ minds off the Brexit debacle, so here we are.

Angus chided the industry for its compliance with advertising content and placement rules, saying it simply “hasn’t been good enough.” Referencing last year’s infamous advertorial-style affiliate marketing shenanigans. Angus noted that the industry had subsequently taken steps to rein in these excesses, “but the damage was done.”

The industry has also come under fire for advertising products that hold particular appeal for children, for sponsoring too many football teams, displaying gambling promos on under-18 team sites and numerous other perceived shortcomings.

The UKGC will impose a new code of conduct for gambling operators as of October 31, and Angus reminded those in attendance that the new rules empower the regulator to take “tougher and swifter action, including fining” for operators caught coloring outside the lines.

Angus closed by warning operators that the regulatory spotlight’s glare is “very firmly on advertising … the lens through which consumers and the wider public judge you, your brand and the wider industry … The decline in public trust and confidence reflects badly on us all – and it needs to be reversed.”

Angus urged operators to “step up now and own this” by learning from past mistakes. “Don’t wait for the storm clouds to burst and precautionary measures to be triggered.”