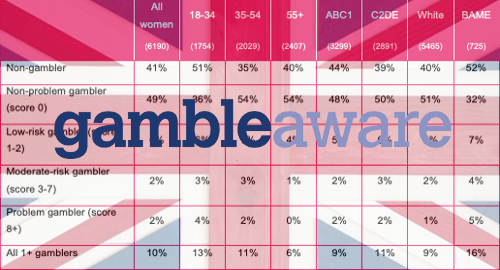 Female problem gamblers in the UK are more likely to be young, working class and from a black, Asian or minority ethnic (BAME) background, according to new research.

On Wednesday, the UK’s GambleAware problem gambling charity issued a report it commissioned from survey stars YouGov on “the experiences of women and gambling.” The YouGov survey queried 6,190 women and 5,971 men across the UK over a three-week period last autumn to determine their ranking on the Problem Gambling Severity Index (PGSI).

The GambleAware survey found 10% of female participants scored 1+, although just 1.9% scored 8+. Both figures were significantly below male participants, who scored 17% and 3.6%, respectively, in those two categories.

BAME women reported greater willingness to seek out problem gambling treatment programs than their white counterparts, and younger women of all backgrounds were more likely to seek help than older women. However, this was attributed in part to these groups experiencing greater harm and thus greater need for support.

Interestingly, female problem gamblers were far more likely (39%) than males (22%) to cite embarrassment or a desire to keep others from learning of their problems as a deterrent to seeking help.

GambleAware CEO Marc Etches said the survey revealed that women “experience gambling harms in different ways to men and this report is an important first step in understanding those differences.”