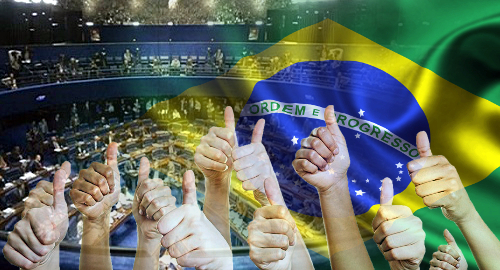 Brazil’s senate has approved a lottery bill that also authorizes both online and land-based sports betting, leaving only the President’s signature for it to become law.

On Wednesday, Brazil’s senate voted in favor of Provisional Measure 846/2018, which primarily deals with how to distribute lottery proceeds, but also authorizes the Ministry of Finance to regulate and license both land-based and online fixed-odds sports betting in a “competitive environment.”

The measure was approved by the Chamber of Deputies on Tuesday, and the parliamentary rules surrounding provisional measures meant that Senate had only until November 28 to vote it up or down. Senators clearly didn’t intend to keep anyone in suspense by waiting until the last minute.

It helped that the measure was supported by both the current Minister of Public Security and the incoming Minister of Justice, thanks to the bill’s promise to direct a tasty chunk of lottery and betting proceeds to public security. Although, given President-elect Jair Bolsonaro’s authoritarian tendencies, Brazilians may live to regret bolstering the capacities of the state security apparatus.

Regardless, the speed with which Brazilian legislators have approved sports betting belies their demonstrated inability to approve previous gambling expansion bills. For years now, both the Chamber and Senate have debated measures that would authorize a variety of new gambling options, including land-based casinos and full-spectrum online gambling, without any real tangible signs of forward progress.

There appears little doubt that outgoing President Michel Temer will sign the new lottery and betting measure into law, as he’s previously gone on record as saying he’d sign any gambling expansion measure approved by the legislature.

The Ministry of Finance will have two years in which to craft its sports betting regulations and issue licenses. The number of licenses, and who will be eligible to bid for them, remains a question mark.

Sports betting’s approval will come as a blow to Las Vegas Sands’ boss Sheldon Adelson, who has been most aggressive in urging Brazil to approve land-based casinos while keeping other gaming options, particularly online gambling, firmly in the prohibited category.

Brazil’s online gambling options are currently limited to the digital division of monopoly lottery operator Loterias Caixa, which has proven popular with the locals following its launch in August.