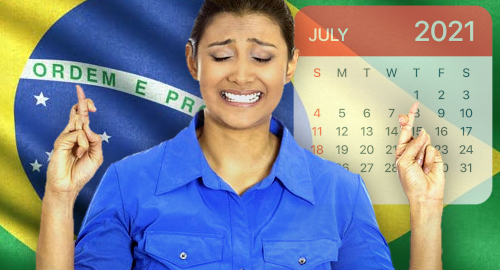 Brazil’s sports betting regulations will reportedly be ready by this summer, although the market isn’t expected to launch until next year.

In an interview published Sunday, Waldir Eustáquio Marques Jr., the undersecretary of prizes and sweepstakes in the Economic Ministry’s Secretariat of Evaluation, Planning, Energy and Lottery (SECAP), said the government will have final online and land-based sports betting rules ready for release by July.

However, issuing licenses will take more time and the betting market isn’t expected to launch until early 2022, which would be over three years since Brazil approved its betting legislation. Marques said the delays were due to the government’s desire to avoid “having to take a step forward and another step back.”

Marques revealed that the government was close to formalizing its regs last year until SECAP had a change of heart regarding the number of licenses it intends to issue. Marques said the original plan to authorize every company that met the licensing requirements had “some points that could be harmful. So we had to put the brakes on, review the model, in order to be able to proceed safely.”

Brazil is well aware of the interest expressed by betting licensees in securing access to a market of 213m souls. The federal government reportedly believes it can earn R$4b-R$10b (US$730m-$1.8b) just from fees imposed on the operators selected to participate in Brazil’s betting market, let alone the sums raised from taxing betting (at 3% of online turnover under the most recent plan).

STATES RACING TO LAUNCH LOTTERIES
Meanwhile, Brazilian states have wasted little time in taking advantage of a recent court ruling clearing the path for intrastate lottery operations. The state of Rio de Janeiro will conduct a public hearing on January 22 “to guide the procedures to continue the exploration of instant lotteries and number games” within the state’s borders.

The state of Maranhão approved a new law in December reviving its Maranhão State Lottery under the control of Maranhão Parcerias S/A, a mixed-capital company linked to the State Secretariat of Government. The Lottery is now empowered to explore all manner of land-based and online lottery options, including instant-win tickets, numeric draws and – ahem – “fixed odds betting, known as ‘sports betting.’”

That latter option has the federal government worried that it won’t be able to raise billions from sports betting licenses. The Supreme Federal Court ruling already brought an end to a lucrative federal contract issued to an IGT-Scientific Games consortium that thought it had a monopoly on Brazilian lottery operations.

As a result, the Economic Ministry’s SECAP is planning to publish new rules by the end of January that guide the creation of state-level lotteries. These rules will reportedly attempt to establish some uniform standards, including a strict ban on states serving customers outside their respective borders and firm percentages on how much lottery revenue goes toward local social programs.