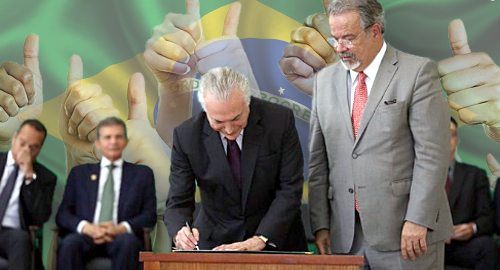 On Wednesday, Brazil’s outgoing President Michel Temer formally put his John Hancock on Provisional Measure 846/2018, a piece of legislation primarily focused on a revised distribution of the nation’s lottery proceeds, but which also includes language authorizing online and land-based fixed odds sports betting for the first time in the country’s history.

Temer, who is only president for another three weeks, was accompanied at the signing ceremony by the ministers of sports, culture, public security and human rights, departments that stand to get a cut of the government’s new gaming revenue. Temer called the event “a brilliant afternoon for public safety, culture, sports and, above all, the Brazilian people.”

PM 846 was approved in astonishingly swift fashion, having been approved by a Chamber of Deputies committee in the first week of November, then passed by both the full Chamber and the Senate in back-to-back sessions less than two weeks later.

Other, more expansive gambling expansion options have languished in both legislative bodies for years now, the victim of stakeholder squabbles, religious opposition and distractions from the country’s endless corruption scandals.

Brazil’s Ministry of Finance will now have two years – although this can be extended by additional two years – in which to craft sports betting regulations and make such thorny decisions as who will get to operate the new betting business.

In particular, while PM 846 states that betting will be conducted “in a competitive environment,” there have been strong suggestions that Brazil intends its betting market as a monopoly affair.

Speaking at last week’s Online Gaming Summit Brazil in Sao Paulo, Alexandre Manoel, secretary of the Ministry of Finance’s department of Fiscal Monitoring, Energy and Lottery, stated that PM 846’s passage “should be understood as a necessary initiative to complete the range of business in the lottery sector in Brazil, and not as a step to legalize gaming activities that are currently prohibited in the country.”